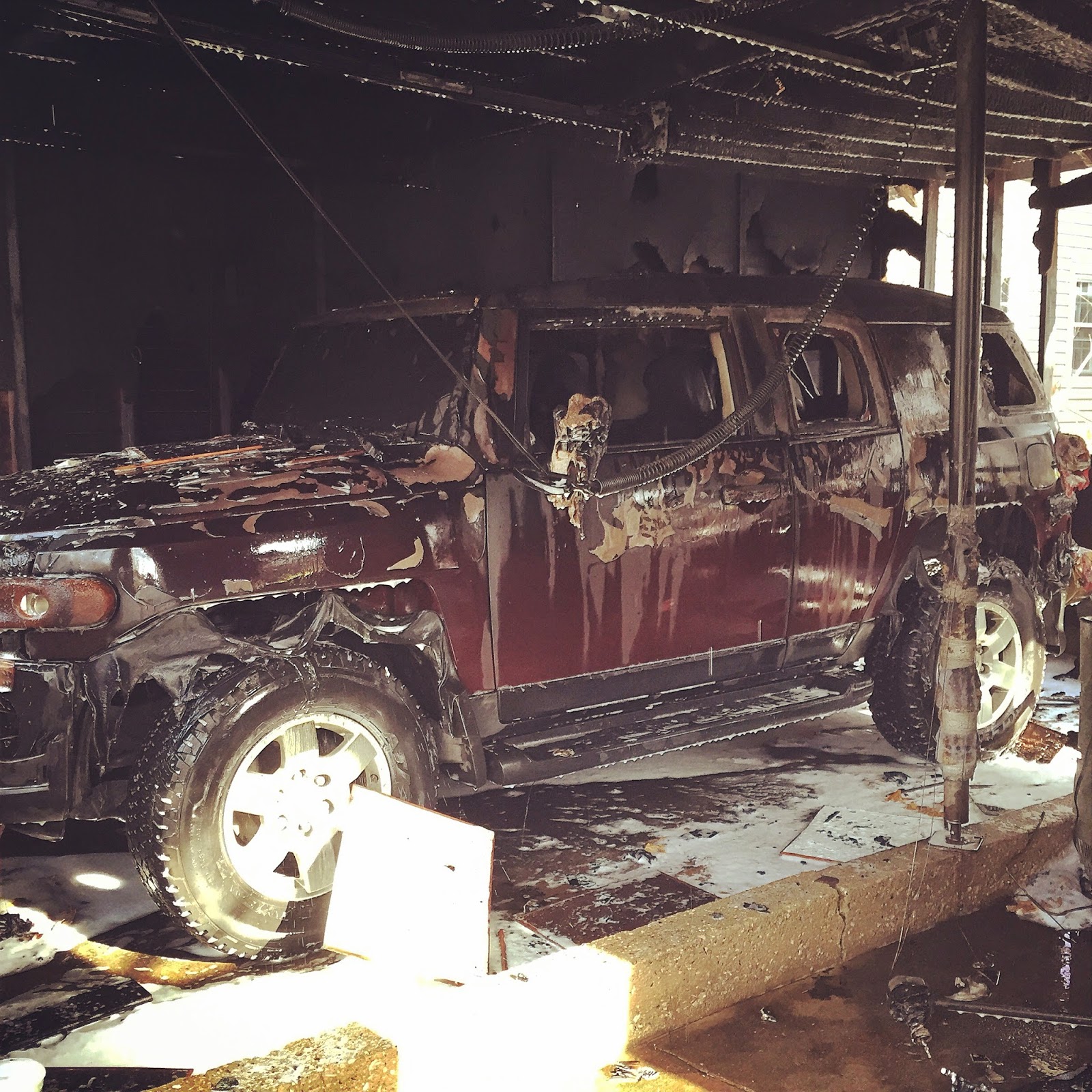 I woke up late one day. I had been up until 4:30 am, thanks to an over-consumption of Nespresso coffee earlier that day. There was nothing I could do about the sleeplessness except read more fiction. I fell asleep eventually, but took my time waking up. It was about 9-930 am when I awoke. I have a prayer group that meets on Tuesdays at 9:30 so I scrambled to head out the door.

The doorbell rang about 9:30 am or so. I didn't bother to answer it because it's usually UPS who dings and dashes.

I made a cup of Nespresso coffee. Strolling over to my kitchen window as I do each and every morning, I saw a few tiny flames coming out of my garage window. I blinked several times because fire + garage + my life dost not equal reality.

I rubbed my eyes.

Was it the firewood we had delivered yesterday? I panicked. Crap!

I kicked it into high gear and ran downstairs to see if my neighbor was home and OK. Perhaps she had began a new casual morning ritual in the garage, equipped with a fire, a lavender reed diffuser, Bailey's & Coffee, and a foot rest. I mean, one never knows in these parts. I hoped I was right.

I remembered then that the door-bell-ringer and my neighbor were talking around 9:30. Maybe he was in on the new ritual.

She did not answer her door. The fire was still going and it seemed to be limited to the garage. My home was not on fire, not that I checked everywhere. Back upstairs.

I called 911 and watched my garage burn as the 911 operator slowly asked questions.
It was now 9:58 am. I was pretty calm, but I was told, Calm down Ma'am. Seriously. Maybe she didn't hear me. I repeated: Garage on fire. 10 feet away. Hurry! Hurry! It's spreading quickly. My new truck is stuck in the garage. Fall leaves everywhere. Old dry wood falling apart, blow it down with a good huff, garage. I wasn't the first person to call 911. Firemen under way.

Then started taking video like any good voyeuristic gawker would do . I wasn't thinking this would be on youtube, or handed over as evidence. I wasn't expecting to be thanked profusely for the video by the three separate fire inspectors and two insurance investigators who all came to the same conclusion based on my video: possibly arson.

I took video because I thought Oliver would think it was cool.

Apparently the door-bell-ringer was the recyclable man. He had seen smoke coming from behind our house but did not carry a cell phone. He normally comes at 3pm, but thank goodness for the new sub shop around the corner. He restructured his route so he could grab lunch that day. He had rang our door bells and my downstairs neighbor was smart enough to answer. (By the way, her name is Amy.)

Six minutes had passed from the time I called 911 to the arrival of the fire department. In that short amount of time the fire went from tiny to monstrous. The flames had engulfed the interior. I wanted to run down and save my truck from melting because it appeared the fire was only on one side, the side away from my FJ Cruiser.

But I didn't want to brave the fire, plus I really wanted to keep taking video for Oliver! I stayed in the comfort of my back porch where these videos (more below) were taken from. It was cozy-warm up there. The fire was hot. The smoke intense. None of it came in my direction. And besides, I was wrong. The fire was too hot and there would have been no way for me to enter the garage to pull my vehicle out safely.

Next the home owner. I was dreading this text. One year earlier, 13 months to the date actually, the house had a large fire. One elderly woman died. The house was empty for an entire year while a restoration company worked diligently to restore it. And I love the woman who owns this house. Remember her? (See item #4 if you click that link.)

My text to her included the photo below and the word: FIRE! I'm sure she appreciated my brevity. 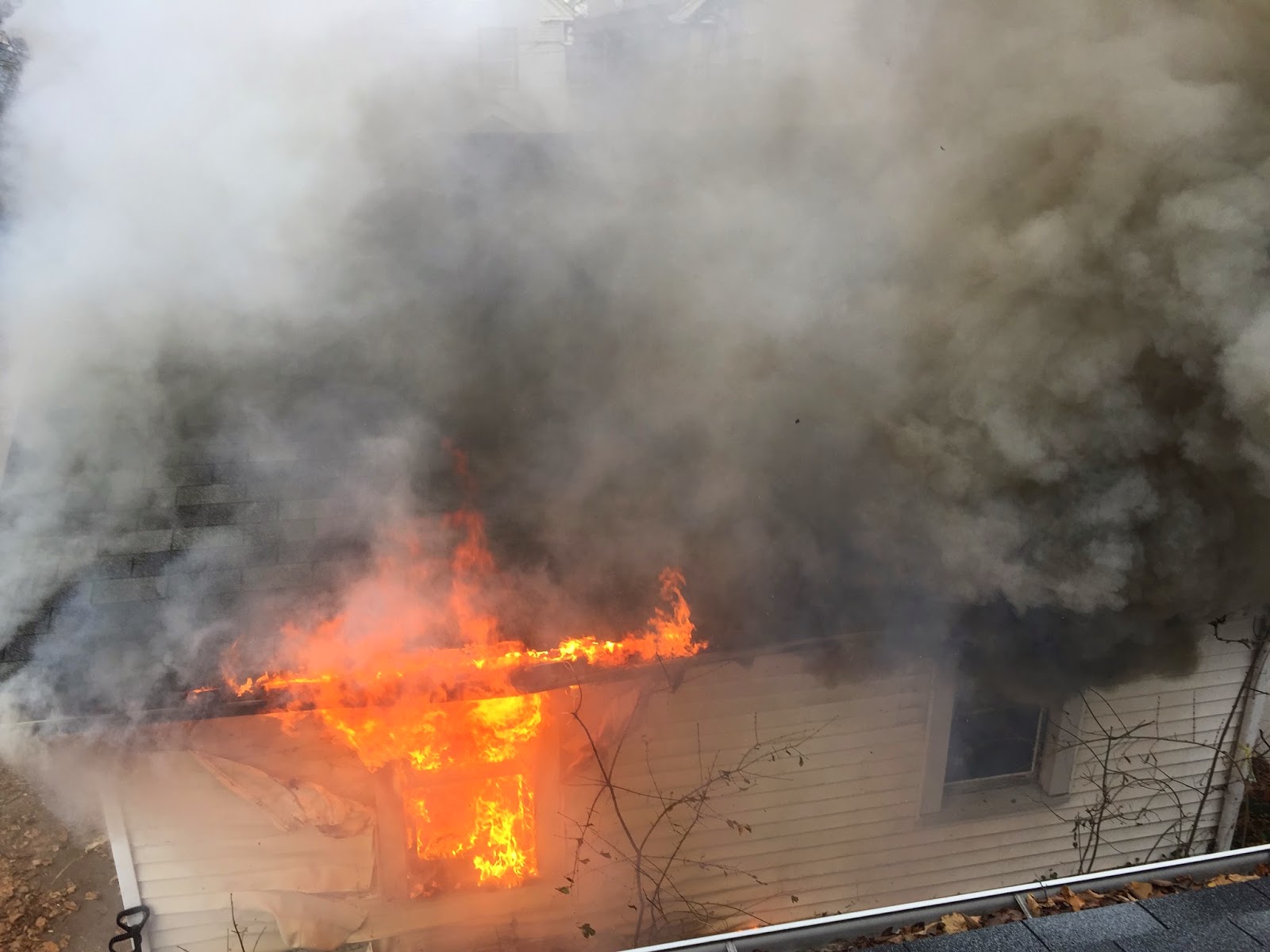 What I can share with you about this experience is twofold:

And in this video, you can hear the fire engines on their way.

It was such a crazy moment in time. The texts started rolling in. I live in a small community. I love that! The moms with whom I am friends texted me because they saw my block was closed off and heard the sirens. Everyone wanted to know if I was OK. 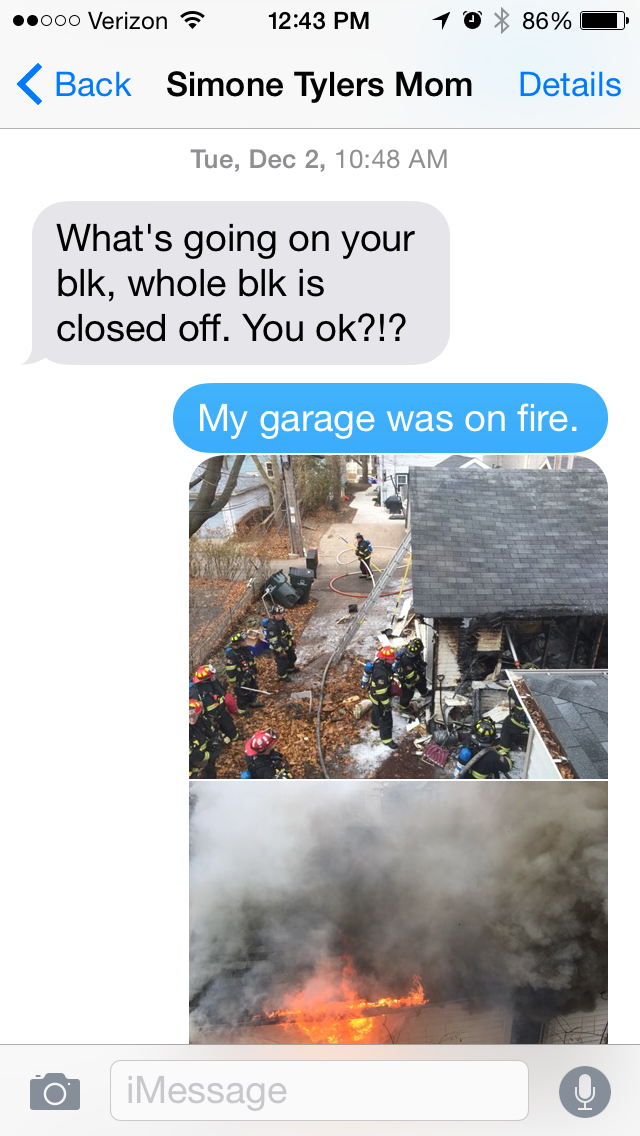 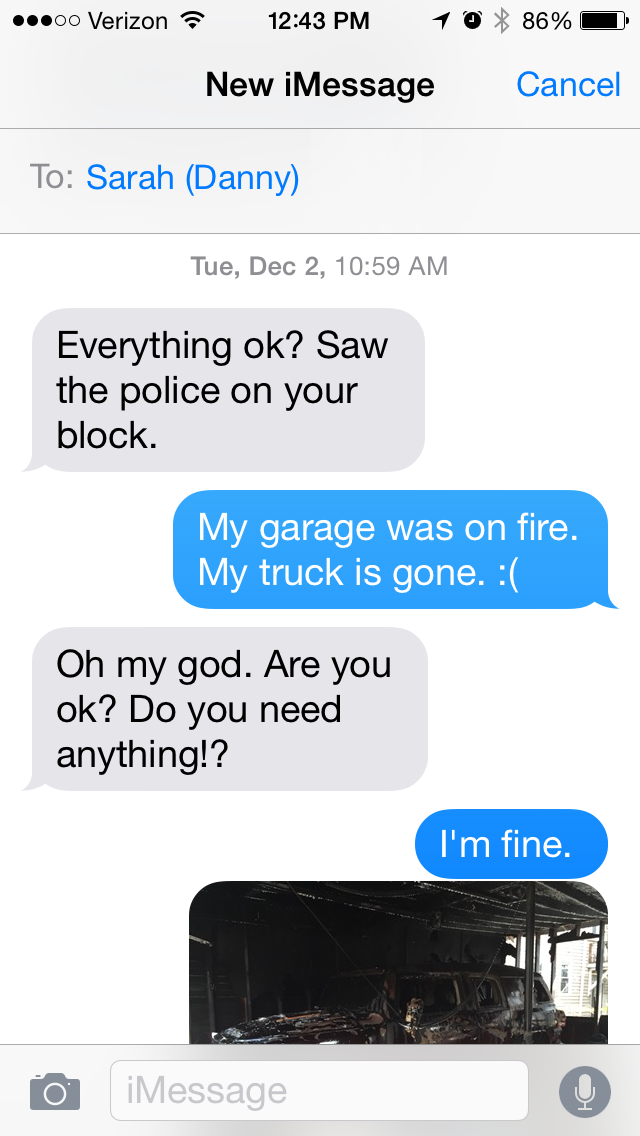 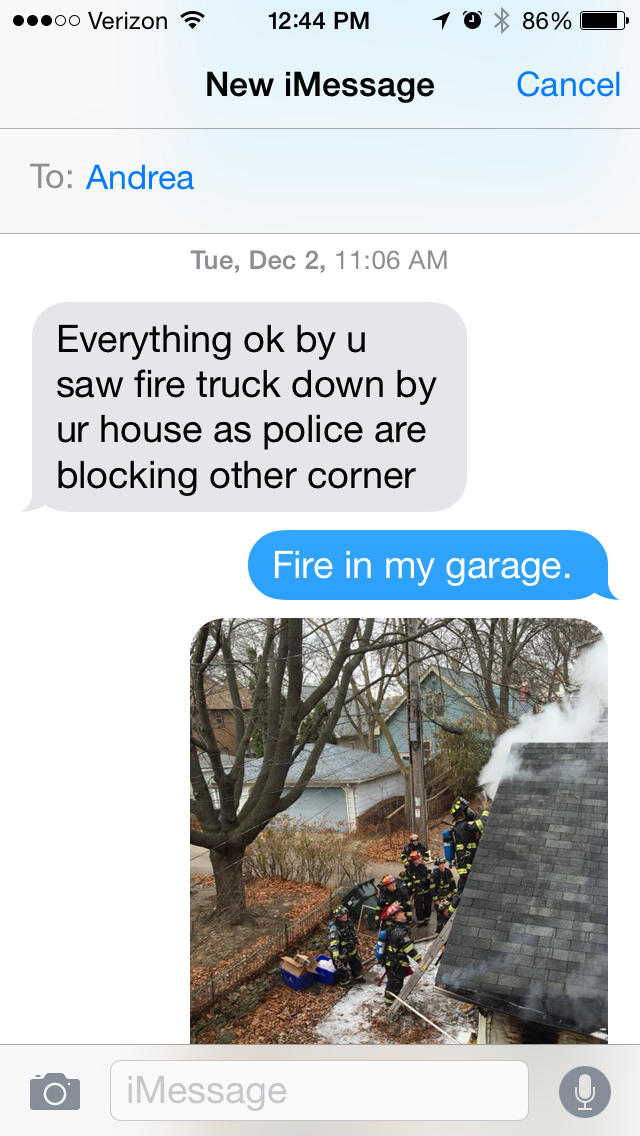 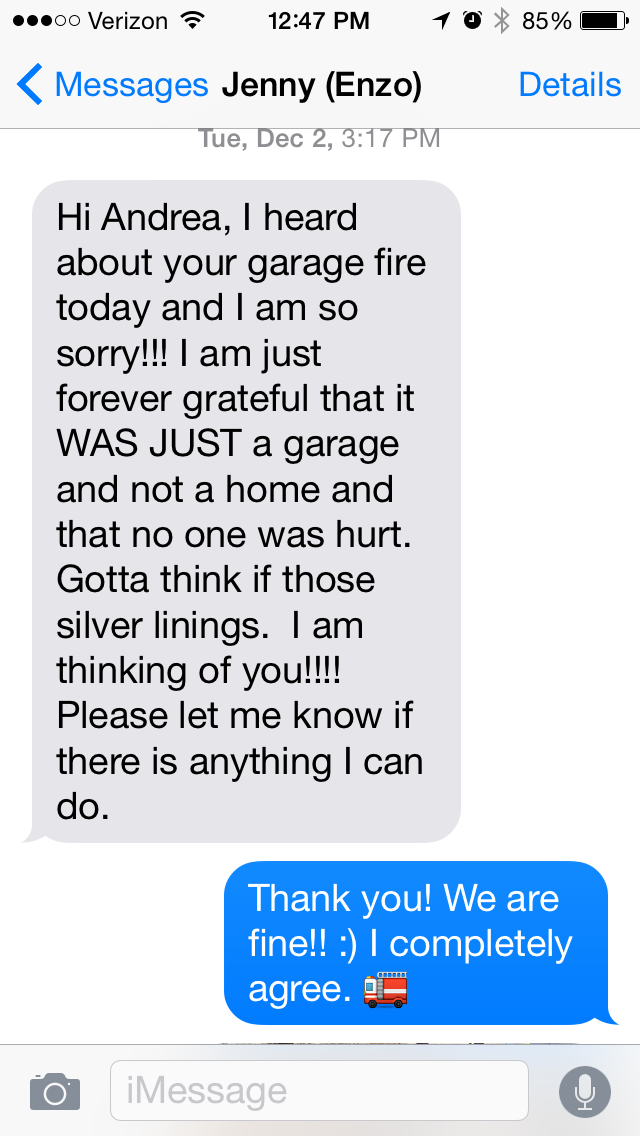 These are the same moms who threw an unpacking party for me. Later that night they chipped in and gave me a Target gift card so I could replace the car seats immediately. I'm so lucky.

And so is Oliver. We live is a small town. The fire department responded immediately. They put out the fire in no time. Everyone is kind and friendly. Sure there is crime. Sure there are jerks (I haven't told you about the old man who lives across the street from me who used the F word!). Banks are robbed. People argue and fight. We are not in Stepford. But it's quaint and lovely and small and no two homes look exactly alike. Women are fashionable and live in high-priced homes, married to surgeons, attorneys, doctors, businessmen; but the women here are friendly and kind. They may dress well, but they are not snobs. 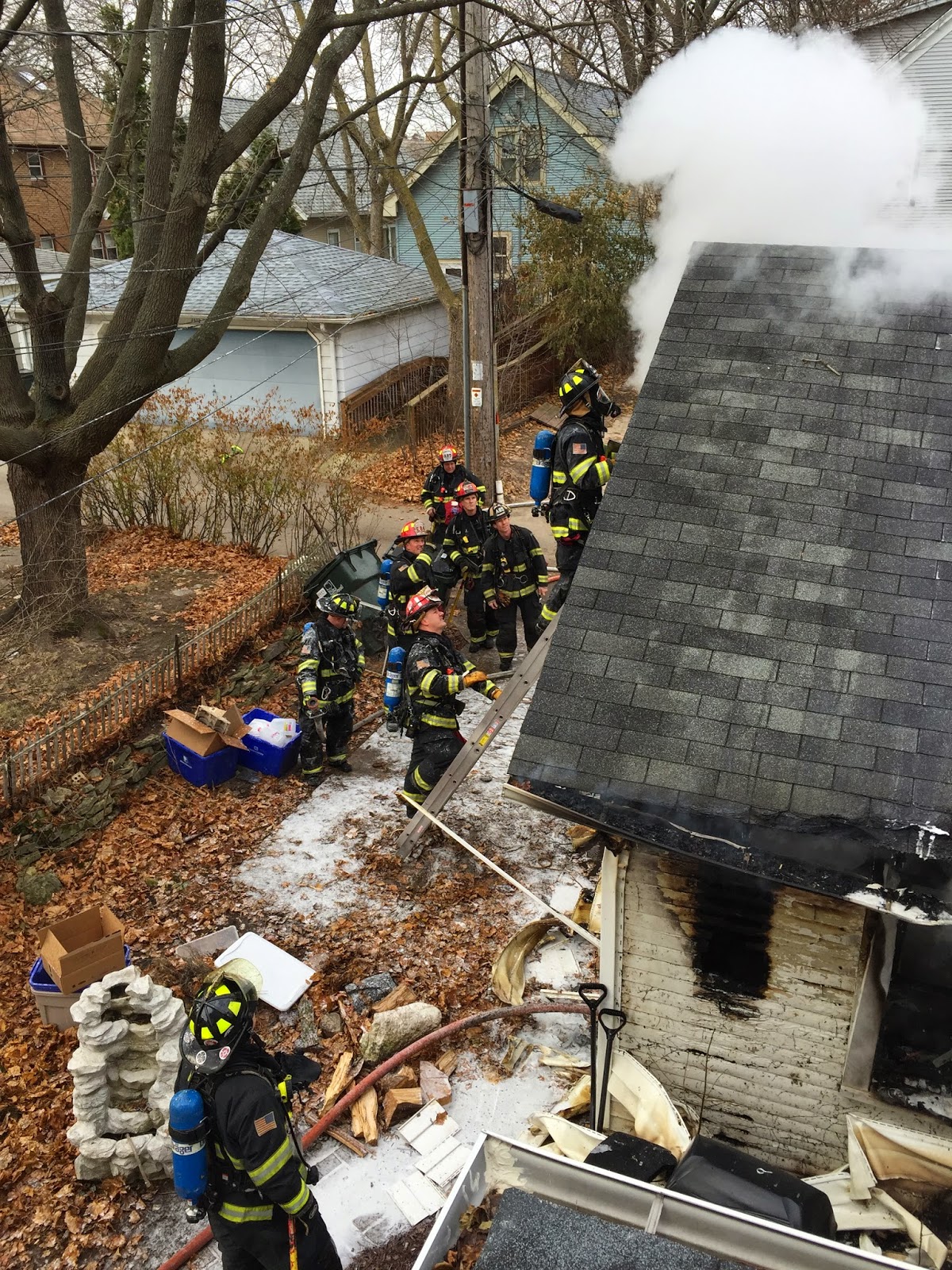 OK, now for the scary part.

They have no clue who may have started it. They have their guesses. They have one lead.

I haven't heard anything since.

I was asked if I had any enemies. I contemplated that thought for a few days.