We are not Irish, just want to make that clear.

However, Oliver’s birthday is right around St Patty's day each year, so it’s become a part of the countdown (March Nine-teef is the day). Last fall when Oliver began to understand the concept of time I used landmarks so that he could see how far away his birthday was. "First there’s Halloween, then Thanksgiving, then St. Nick’s, then Christmas, then New Year’s, then Valentine’s Day, then St. Patrick’s Day, then... your birthday.” Which, when mentioning the birthday always resulted in a Yay!!! Happy Dance!!!

While Oliver’s birthday was only two days away, we absolutely had to celebrate this last landmark.

Therefor, the night before St. Patty’s Day, Oliver set a trap, for you see, Leprechauns love a good joke. And we all know that you can trap a Leprechaun, but they always escape, no exceptions. Those little green creatures love shiny objects and pots of gold.

First, in order to lure the Leprechaun toward the trap, Peanut had to draw a rainbow. Most Leprechauns know that there is a pot of gold at the end of a rainbow.

We then found an old shoe box. This was especially clever because Leprechauns are shoemakers. Oliver taped pennies to the exterior, put a green Christmas bow outside, placed it on his green lego platform (oh those little Leprechauns, they just adore anything green) and then built stairs so that the little guy could climb into the box. We propped it open with a little glow stick. We were sure the Leprechaun would love that because who doesn’t love a glow stick! 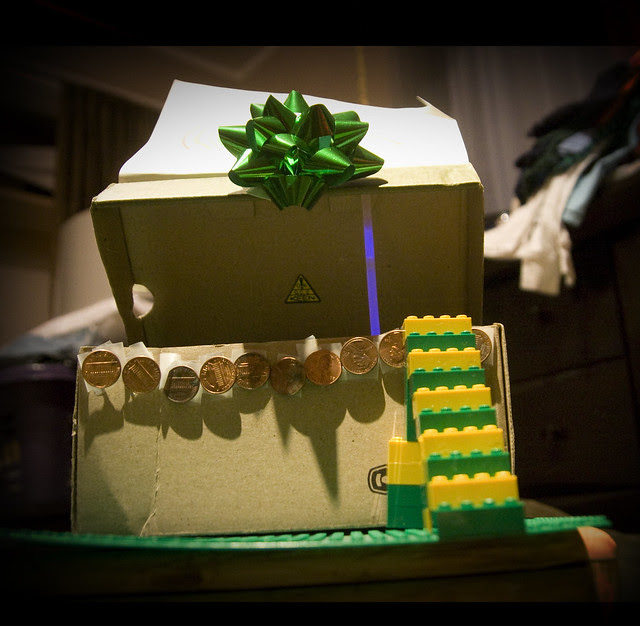 Inside, Oliver filled the box with green paper grass, like the stuff you'd see in an Easter basket. To entice the Leprechaun into the box, we placed a gold Christmas bow inside.

Sure enough, the trap worked and Oliver snared a Leprechaun! In the morning the box was shut, the pennies were nearly gone. 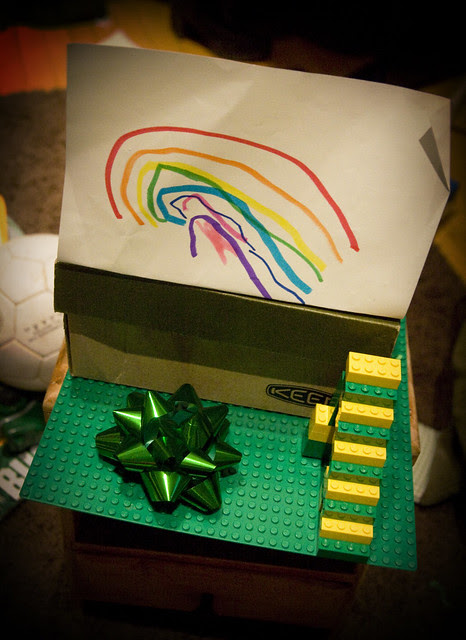 Upon opening the box, we saw the Leprechaun had escaped, but that was to be expected.

We were anxious to see if anything was left behind. If the Leprechaun enjoyed being tricked by Oliver, he’d leave him a couple of gold coins or a chocolate coin or something of the sort. But... if he thought Oliver’s trick was not very clever, he’d leave Oliver a lonely, cold stone.

Sure enough, Oliver must have done well because the Leprechaun left him a couple of gold coins AND a couple chocolate coins too! 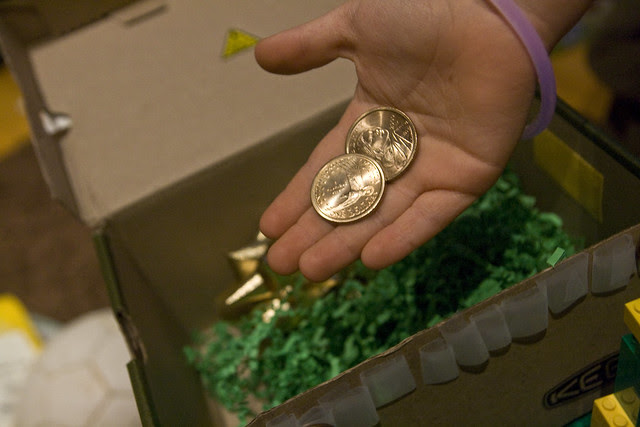 What fun! But that wasn’t all, for when Oliver began his morning rituals he saw the mischevous Leprechaun had played some pranks on him as well!

That silly sprite had changed his toilet water to green!

And his milk too!

It took a week or more, but then Oliver discovered the green elf had painted a corner of his bedroom wall green too!

If there’s anything else you need to know about Leprechauns, just ask Peanut. He knows all about them.