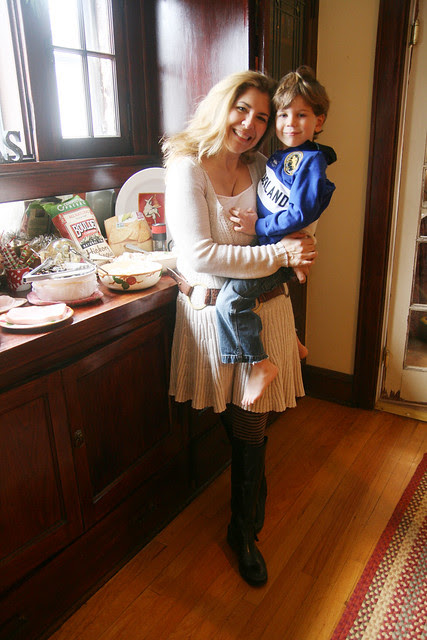 Lest you think my child is perfect and my single-motherdom is idyllic, read on.

We made it through the first set of celebrations, altho I resolved that I will give Oliver only ONE (count 'em ONE) Christmas gift next year from me. And one from Santa. And. That's. It.

I've one word for Oliver: SPOILED.

Oops, that second word is actually for me. This year I had Christmas Eve and Christmas Day at my home, and then I went to a dinner party Christmas Night. The past couple years it's been just Christmas Day at my place. I was only able to relax at 10pm on the 25th as I plopped onto my couch and sipped a glass of red wine. I had poured myself a glass earlier that day but forgot to drink it. Same with the night before. Tsk Tsk. Waste of crushed grapes.

This year I made bank. Oliver created several beautiful craft projects and wrapped them for me to open on Christmas. I also received perfume from him too! How'd he know I love Juicy Couture? :)

Ah, but despite his non-grinch-like attitude, he was much more invested in the spirit of receiving than giving. We had a little monster on our hands. My dear sweet beautiful child turned into a raging, overly-greedy, eyes-glazed-over termite, determined to open each and every present until not one was left untouched. As if the 20 bazillion gifts he received weren't enough, he whined and whined because he wanted more.

I feel I went wrong somewhere.

But I'm not sure where.

Perhaps it was because he had already celebrated Christmas with his father. I was duped again. Oliver and his dad celebrated Christmas Eve on the 23rd. At 12:30 am, Oliver awoke and started looking out his window for Santa. "Christmas" morning the 24th, Santa arrived at his father's place; Peanut received the best of two worlds in one package: Lego Train. He barely had time to play with it when he had to head back home, crabby, sad, grumpy, whiney, defiant, combative — just a plain ol' spoiled kid.

This was his attitude on the real Christmas Eve (the 24th) and Christmas morning. Our Christmas morning was nothing like it had ever been. Oliver was whiney, crabby, defiant, ungrateful, demanding. My sweet boy who had been an angel all month, was now a greedy little imp.

He had a time out before he even got out of bed that morning. Don't ask. He found a way to get himself into deep doo-doo one more time.

I, too, came crashing down. Sad that what I had so looked forward to was taken away. We didn't even get to put out cookies for Santa. Oliver had done it the night before with his father and was so exhausted and crabby on the 24th, he went right to bed. He was so pooped, he didn't even want a story read to him.

On the 26th after one more bold episode of resistance, I had had enough and piled up all his Christmas gifts and put them away. He took a time out in his room, crying that all his gifts were out of reach and that he'd never see them again. I made no claims that they'd be permanently gone, but that's what 4-yr olds do: jump to logical conclusions. So here they sit in a pile in my room. He cried himself into a tizzy and passed out cold. It was only 1:30 in the afternoon. At 3:45 I had to wake him because his father was coming to get him. I gladly pushed him out the door sent him on his way.

The child is completely wiped out. Still.

And it's not even over yet. Oh Lordie. That boy has one more gift to open. Not from me, mind you. No. I'm done with that monster. No more gifts. But one arrived in the mail and I've purposely kept it from him.