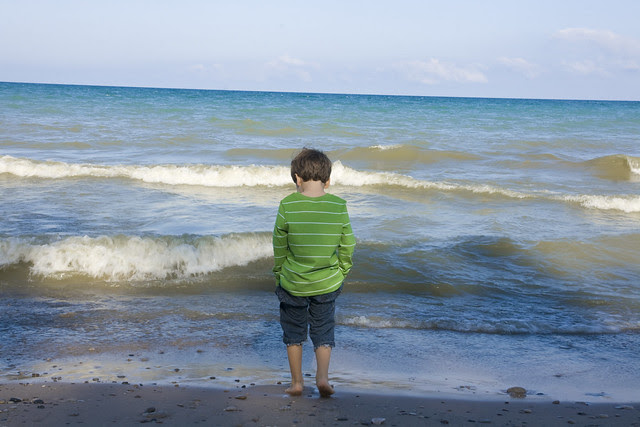 The weather’s been great. We weren’t quite ready for the transition from summer to fall, but our reluctance has been rewarded with an incredible spectrum of remarkably vibrant color. 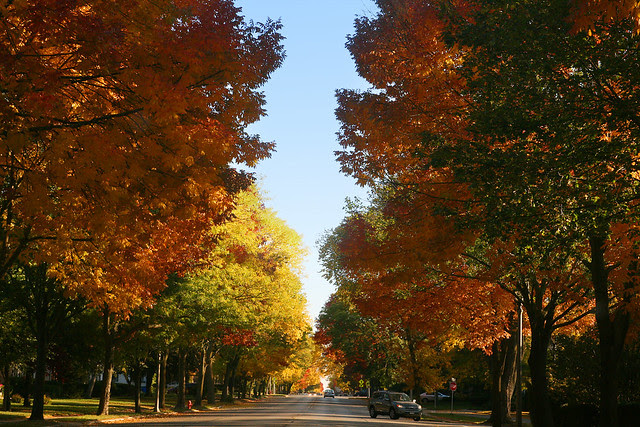 Above is our neighborhood. We live in a forest, no doubt, complete with creatures lurking about (the local law enforcement) protecting our small village. Oliver and I live in a real live village, a community that is starting to reveal itself to me now that I am a mother of a child enrolled in the local school district. I’ve met more mothers and fathers lately—many of whom live only doors away from us! They’ve come out of the woodwork each morning to deliver their budding toddlers to the care of new faces, smells, rituals and rules. 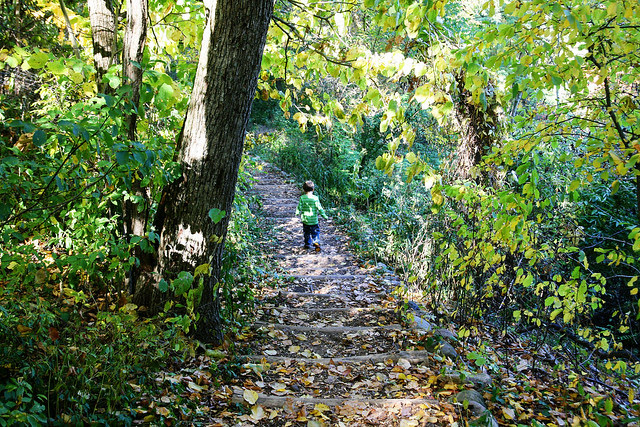 We decided to hike this afternoon at Schlitz Audubon Nature Center where we are members. Door County is not the only place to find beautiful and clean trails with lots of lush greens to experience. The nature center is only about 10-15 minutes away from our home and is where Oliver spent 6 weeks at day camp this summer.

I’m not sure why I chose a bright green shirt for Oliver today. He blended in with the scenery quite well, and like all the forest creatures, I had to look keenly to discover his whereabouts at times — my real life version of Where's Waldo. Can you find him below? 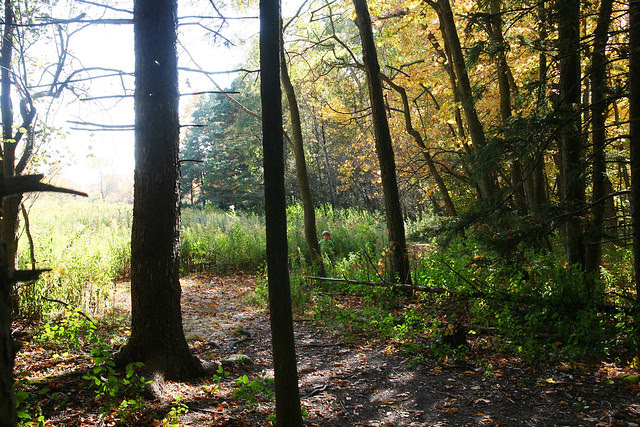 Peanut lead the way as he was quite familiar with the trails. At camp each day, rain or shine, the 4-year old adventurists climbed into their rain boots and piled on their hiking gear (a stick and a water bottle) and discovered the outdoors. My son routinely returned from the lake hike each week covered in beach, the only child who bathed himself in water, rocks and sand. His teachers would smile at pick up and comment, “Oliver really enjoyed himself today.” 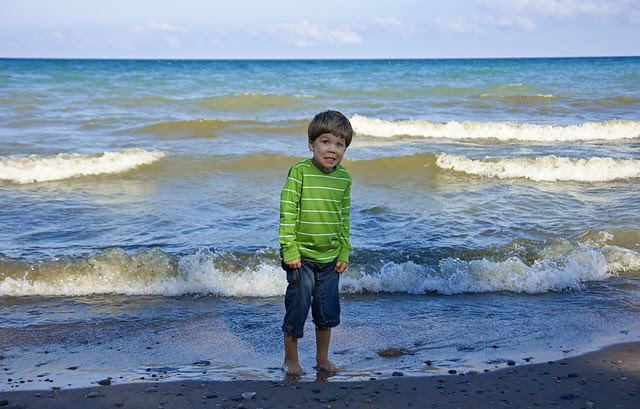 It’s no surprise then he lead us to the lake, and my little ham couldn't resist the water despite cooler temps. Nothing could stop him from taking advantage of the wind and waves. 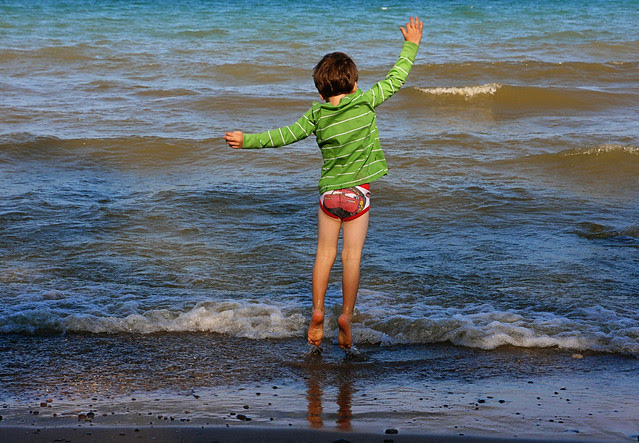 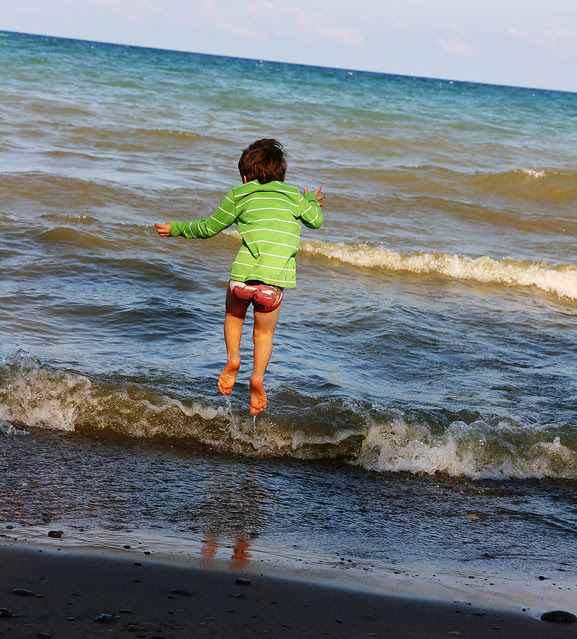 I’m so in love with that booty which is still much like a little baby’s bottom. He’s getting a bit too old for me to show you it anymore, and I relish this time because I’m not sure how much longer I can get away with squeezing it. Oh my God, I love it. 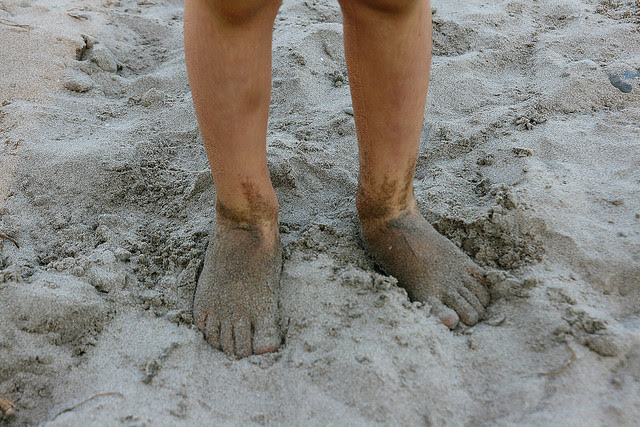 I still kiss my son’s toes every night, just not when they are full of dirt and sand (which is like every day).

We dried off and headed back up to the center. Oliver lead the way and kept us away from the trails that had poison ivy. I thanked him. :)

Once at the top he suggested we climb the lookout tower. Holy crap. Y’all know I have a fear of heights, right? I mean it. A real phobia. I actually get immobilized — frozen. I hardly can climb a lookout tower without another adult around, just in case. I’ve been practicing getting over it the past few years and I’m able to climb lookout towers now, with extreme caution. The fear of heights is so dramatic that I actually once got to the top of one of those slides — you know, the kind with the potato sack that you climb on top of and slide way way waaaaaaaaay down — only to head back down on the stairs, having to excuse myself past each adult and small child waiting in line who mocked my fear of heights. Not fun. :) Climbing down I was in fear as well, altho it was a much better alternative than facing death on the slide. Thank God for the stranger who took my son down the slide (the fun way). Sheesh. 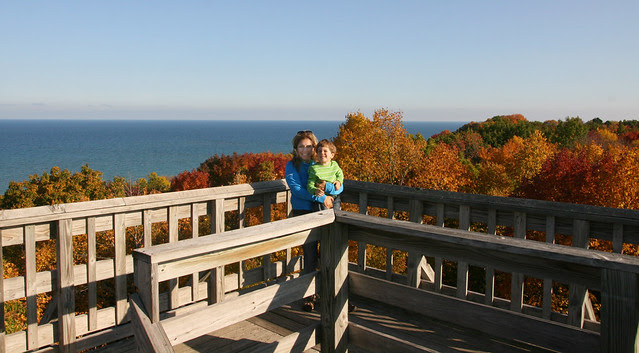 I’m so grateful another adult was on her way up the tower today. It gave me comfort in case my phobia kicked in and I stood frozen in time. I could always ask for the help of a stranger to take my son back down the tower... and then come and get me. I guess the little kids in the Audubon camps do not have to hold anyone’s hand on the way way waaaaaaaaaay up, but I could not let go of Oliver’s. I was in fear of falling. I was in fear that the tower would collapse (I told you this is a REAL fear), and I was unsure of Oliver’s capabilities or how secure the tower was for little ones. That was a LOT to deal with!

But we made it, as you can see. 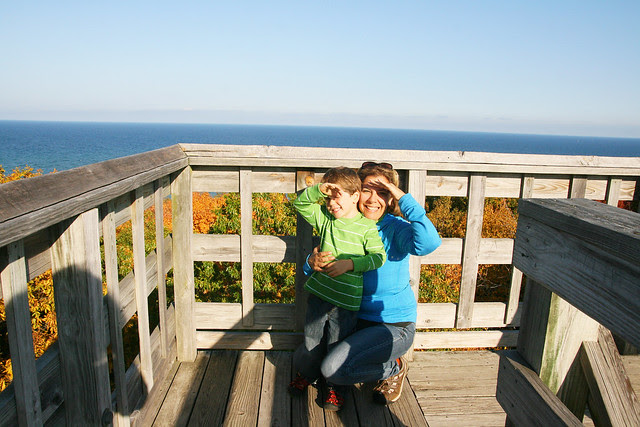 The view on the top was stunning. I could enjoy it for tiny fractions of seconds when I wasn't worried that Oliver would fall thru the cracks or that his tugging on the suspension rods would collapse the tower (hello Acrophobia). 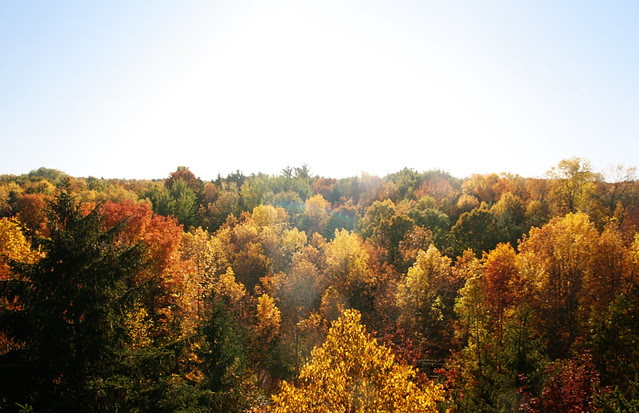 Back on solid ground we tossed leaves into the air, a much safer adventure for me. I was watching my son at first and then realized that I needed to participate, not just spectate. It was a ton of fun throwing leaves up and then trying to catch them on their way back down. Try it some time. It’s not that easy.

The expression my arms and torso made allowed some of the negative energy surrounding my heart to escape. It was as if I had been holding onto pain tight to my chest, close to my heart. The motion of throwing the leaves up in the air opened release the clamp around insides, and I could breathe. I was reluctant at first. Letting go. It’s a tough one for me. 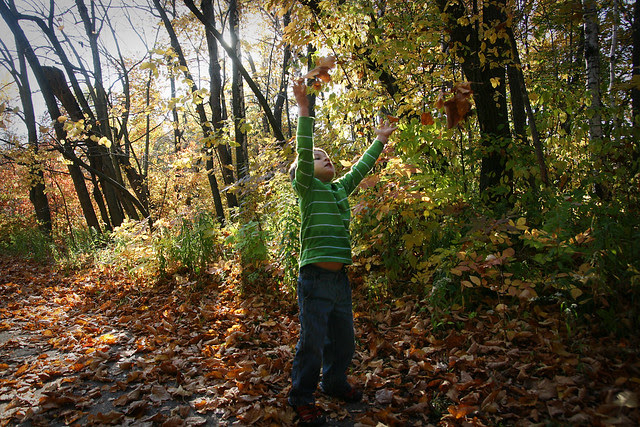 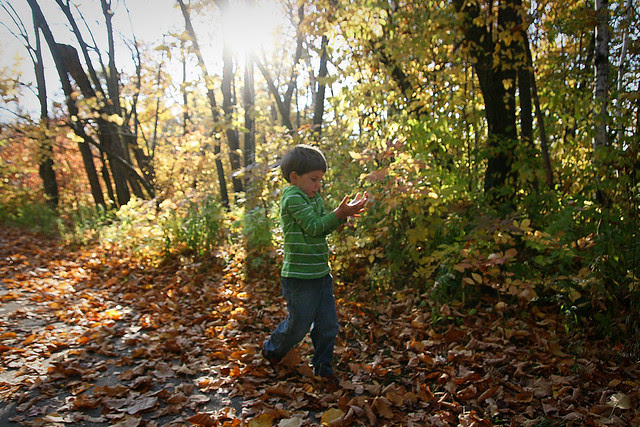 I watched Oliver express himself. He has no cares. He’s free. 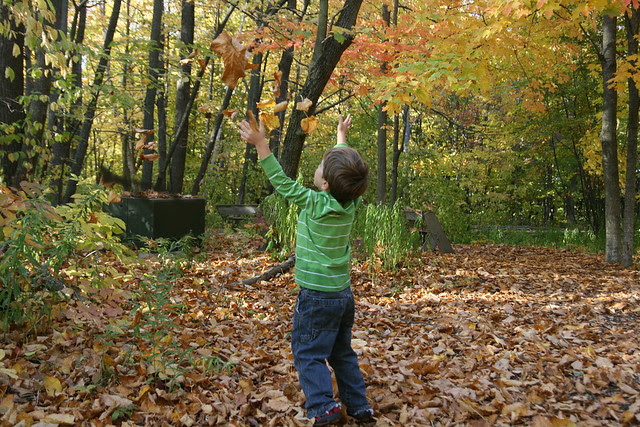 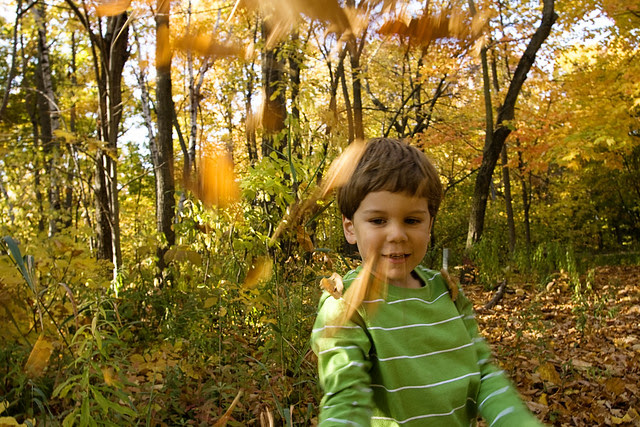 It was great to see the pure joy my Peanut was having. I felt grateful I got to be there for him. I know I’ll feel that same joy again some day. And I bet it will be in the distant future, not too far from today. 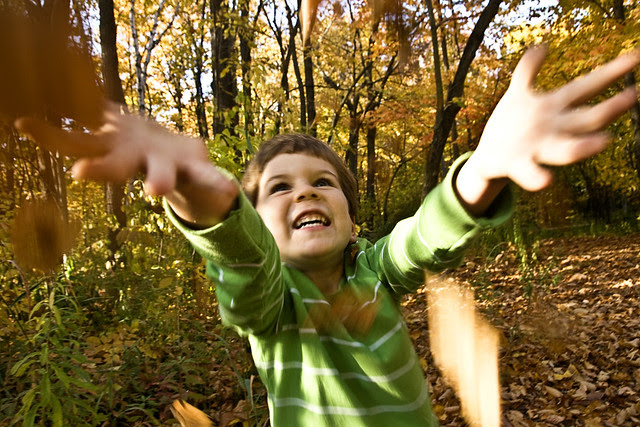 After leaf tossing, we headed back to the parking lot and when I turned around, I saw this: 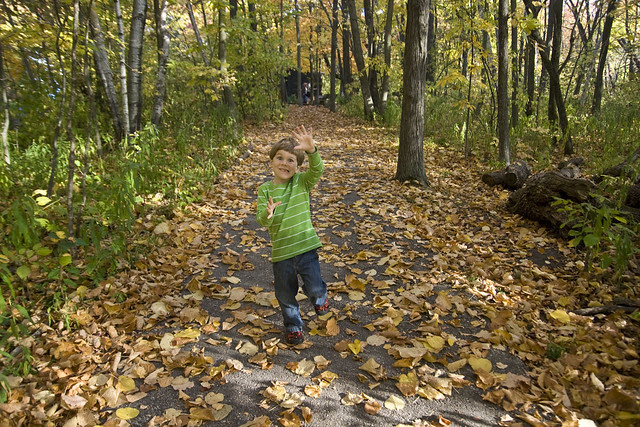 I think his personality is definitely formed, and when he goofs about, I imagine what kind of adult this little boy will some day be.

As we returned to our car, another family was returning home from their hike. 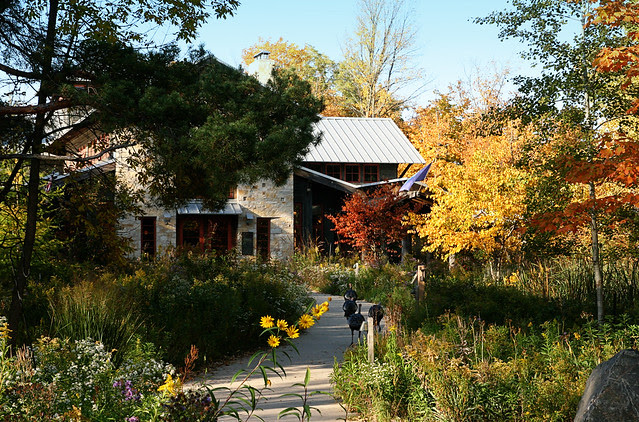 That's the front of the nature center. And those are four giant brave turkeys walking up the front. Y’all know what holiday is fast approaching. And y’all know this is a hunting state. 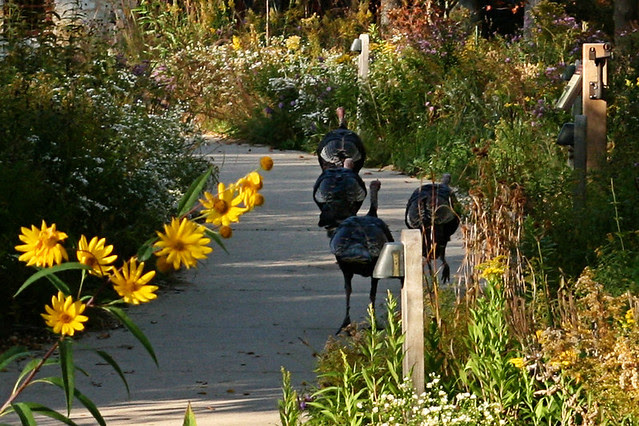 Those turkeys were done for the day. And so were we. Earlier at the beach Oliver was talking about the hot shower he would take when he got home. Sure enough, once home he headed straight to the bathroom and steamed up. I put dinner in the oven, and when he was fresh and clean, we sat down and ate together.

That, my friends, is my life. Sad at times, but plunging thru the depression that wants to encase me and being there for my son, despite how my heart is feeling.