Half Full or Half Empty?

It's the proverbial question. How does one see the glass? I love my life and who I am, as long as I am not sitting down and comparing it to someone else's life. Even when I do, briefly, I don't want anyone else's life. I want my own. I like mine. There are times however when I think if I were Angelina Jolie married to Brad Pitt and could travel the world and have the types of friends they do, well maybe, just then, I might think about trading lives. As long as Oliver could come with me. 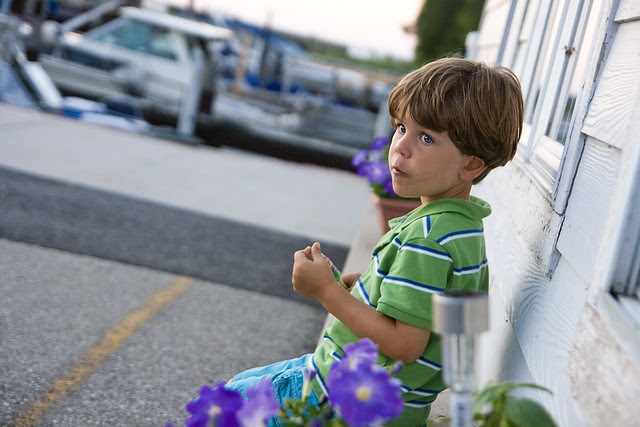 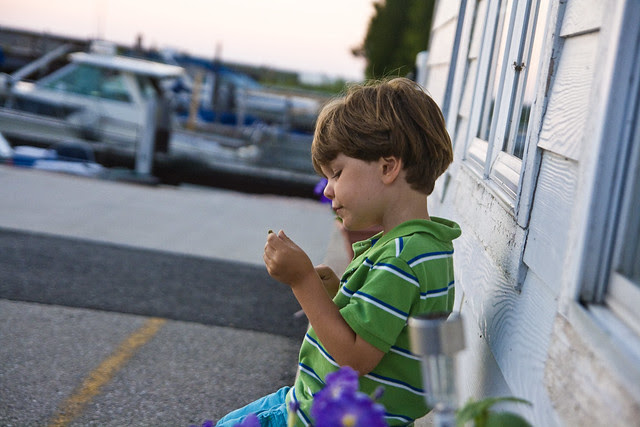 I've got the “end of vacation” blues already. We’ve been in Door County all week. It’s been lovely and y’all know how much I love small towns. Gills Rock certainly has its charm. We know everyone up here now; all the locals say hello to Oliver by name. We have our favorite watering holes. Shop owners know us by name. The same woman who waits on us at the pizza joint also manages the laundry mat and also happened to sit next to us for the fireworks this week. In the fireworks crowd another familiar voice shouts out in the darkness, “Hey Oliver! Did you enjoy the show? Now, stay close to your Mama!” My neighbor’s son, Rick, was directing traffic on the 4th. He stopped traffic to let us cross the street. The fireworks show was only steps away from our cottage. This life style is nothing spectacular. Just simple living. Gills Rock is a quiet town where family names can be traced back several generations. 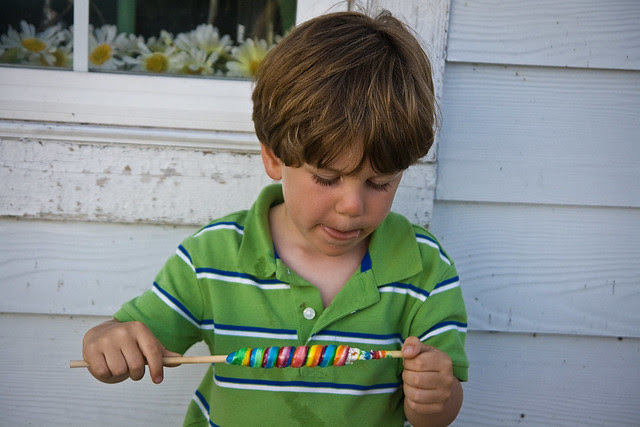 We leave today. But we didn't get to do everything I hoped we could do. My father came to visit and that didn't turn out the way I wished either. Time away from Milwaukee is sparse and precious. To be alone with my son for several days in a row is a rare occasion. I wish I had more time up here (I am careful of what I wish for since the economy has put the fact that I am employed at the top of my gratitude list daily). I worked hard to earn this time off, to wake up next to my son each morning, to be the sole caretaker for him, to be able to afford go-karts, mini golf, food on the table, dinners out, even the fuel to transport us up here. We were here for 5 nights, and it feels like it was not enough time. 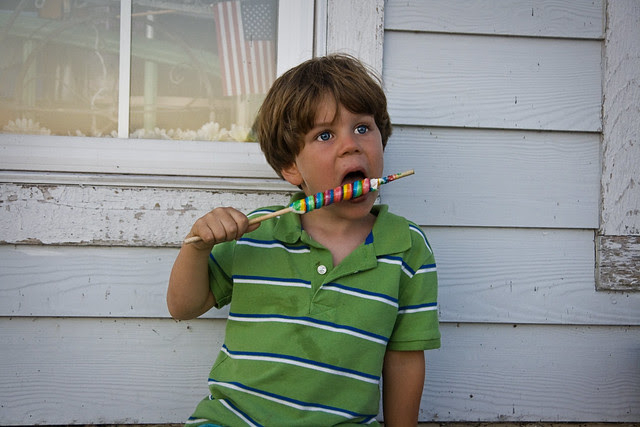 I think the first morning here was the most precious. Each neighbor saw our car in the gravel drive and stopped by to say hi. All the cottage owners were up for the week. The locals came by too. Before noon we had been invited to a local cookout for the 4th. We didn't rush to see a parade (my regular MO). We hung out in the quiet refrain of our respite and allowed the soft light to breath into our windows, acclimating us into our new surroundings. Quiet. Soft. Lovely.

Later in the day we met up with our friends Louann and Tim who stayed the night. We swam, participated in the Gills Rock Regatta (aka boat parade) and helped the local economy by sharing a few cones of dairy sweetness. The next day our friends bid farewell and my father and Dotti arrived. 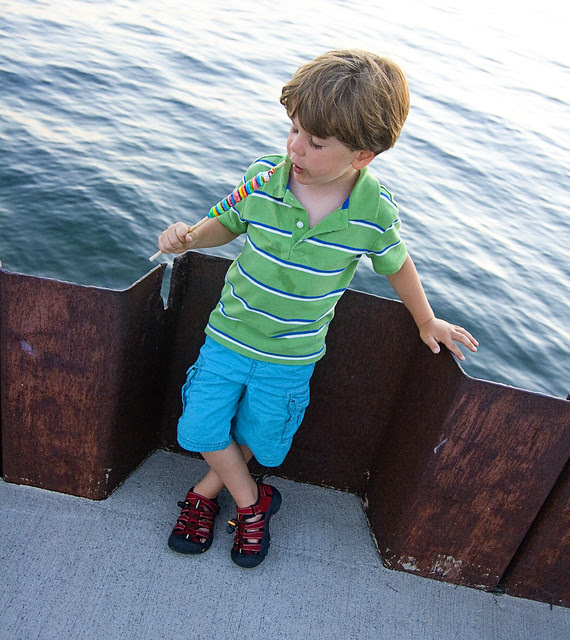 The week was spent with my 84-yr old father and 91-yr old Dotti (you wouldn’t quite guess their ages. They are quite the sharp and active couple). And that's where I question if my life is half full or half empty. We spent time with them, hanging out at the cottage, my father taking Oliver to the park, waiting in long long lines at restaurants, listening to Dotti and my father bicker (it’s just how they communicate) and hearing my father who absolutely loves it up here complain about pretty much everything he encountered. I felt bad b/c he had such high expectations about the visit. He talked about being here the entire week before arriving, already picking out where he was going to eat, what he was going to do, what he wanted to do with Oliver. He was so looking forward to this time away, time with his daughter and grandson.

And so it went. He spent a lot of time with Oliver and he was really sweet to him. He went to all the places he had hoped to go. And yet, each experience was met with disappointment. He had to wait too long for a table, the coffee was not strong enough, the food was not as good as last time, the traffic was unbearable (it's a holiday weekend and very packed up here).

Then the last day, yesterday, I felt the vacation was ending fast and Oliver had yet to have much time dedicated to little boy activities. So we spent the day apart from Oliver's grandparents. We canceled our dinner reservations (a long story) because my father just wanted to eat left overs. My dad and Dotti, disappointed in the heavy traffic, decided to head back to the cottage and do their own thing for the day, including eating dinner apart. This was my idea. I was feeling antsy that time was spinning fast and some of the things I wanted to do with Oliver weren't going to happen. Oliver and I went to the beach. Go-karting. Mini golfing. Pizza. Ice cream. Two candy shops. Toy shopping. We had a blast.

But to leave w/o saying good bye? To come back to an empty cottage? My son just cried. “Did he take the watermelon?” Oliver asked in desperation. At first I said yes, and that’s when the tears came out. Then I saw the watermelon on the patio, purposely left behind for us. One more reminder of an expectation my father had (he wanted to have us all share that giant watermelon) that we just never got to.

I’m torn between feeling bad for my father and feeling angry that he just up and left. In a few days I know all I’ll really be left with is compassion. 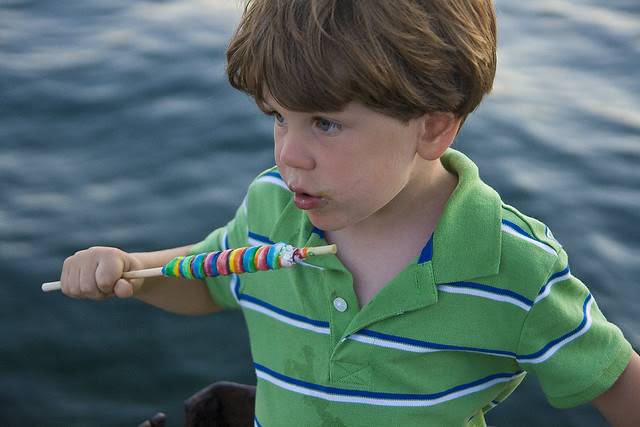 Here we are. It’s another sweet morning, just the two of us. It’s nice. Perhaps this is how it should have been the whole time. Lesson learned: next time I have a week off, have only 1 guest, and only for a day or two. End. of. Story.

I have 4 more days of vacation left this year, two being used with my friends to come up to my cottage again. That leaves two. Two more days to be with Oliver, to be a present mother, to spend time creating memories, ones that will last, feelings that will last.

Those last two days I will be spending with just my son. 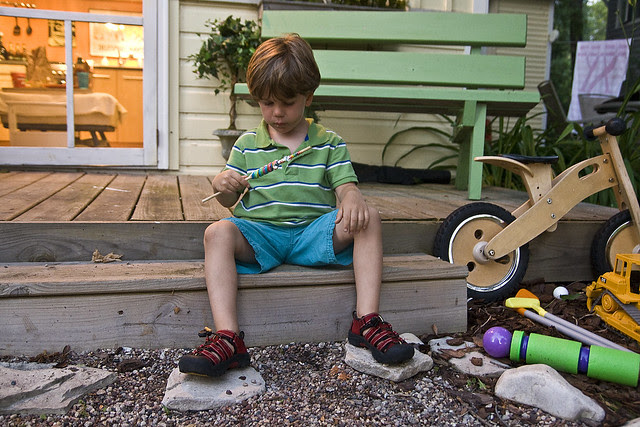 I woke up and reality hit me like a brick wall. I wish it would not have ended like this. My first instinct is to knock down the house just because the door has come unhinged. Second thought: just sit for a while and buck up. Life does not always go the way we want it to.
Labels: 4th of July Door County Oliver pix Summer 2012