There are warmer temps in Wisconsin these days. Oliver's 4th birthday is less than 1 month away. Four years ago when he was born there was a full moon (go figure) and a huge snow storm ensuing. I watched it from the safety of my hospital room. 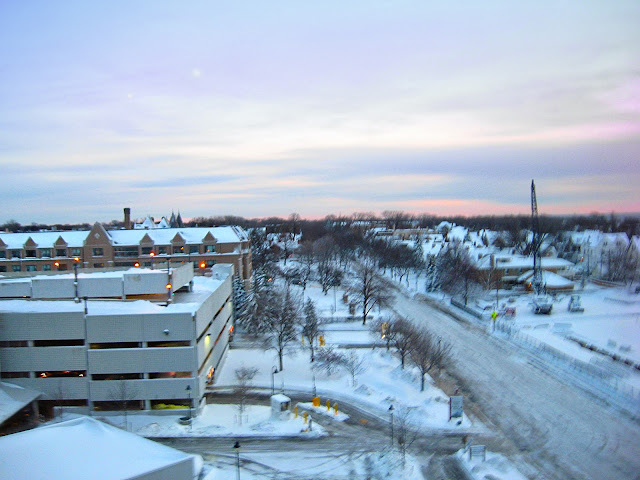 Matt, myself and Oliver. In that room. Five days. Matt never left my side. The whole thing was surreal. I was quite happy to have this baby.

Look how little newborns are. It still amazes me. That he started life in my own body is really incredible. They opened me up and pulled him out.

Today and yesterday, and even the day before, I walked around (from house to car, car to office, office to car, car to daycare, you get the picture) without a winter coat on. I allowed my son to play in the dirt on Sunday in a t-shirt. No jacket. No hat. No gloves. I knew he'd come in when he got cold. I don't force my will upon him for things like this. I save my tyrannical acts for running in the alley, playing in the street, things like that. It was in the 30's. Bathed in sunlight, you could actually say it was warm. The ground defrosting bore the scent of spring. Birds were chirping in the yard. So beautiful. So sweet. So springlike.

A season I loved is now a season of dread. Memories have come flooding back in these warmer temps. The pain and anguish, the shock, the hurt, the astonishment, the innocence, the pure raw emotions from two springs ago.....that's what floods back.

There's still grief. That will take time I suppose, to rid my body of it. I remember the hurt I felt, Spring 2010. When I remember how I felt, I re-experience, re-feel that hurt again. Twinges of it. Not hours, not days, not a life of that — just flash backs. When I flash back, I feel the flesh ripping.

I hurt for me. I hurt because I can see it now, I can see what YOU saw. I can see that desperate hunt, that woman begging, pleading, turning herself INSIDE and OUT to get him back. Accepting the unacceptable. That's what I did. I accepted being treated poorly. I took that. I drank it up. I looked the other way. I spend hundreds, thousands of dollars trying to work it out. I turned myself inside out trying to figure him out, trying to make sense of this. When in truth, there was nothing to figure out. He was not definable.

Two years ago, I watched my son scream and cry, chasing his father's truck down the street as he left our home, "Daddy!!!!!!!!! Daddy!!!! Come back!!!!!" My tiny two year old, running, in desperation, down the street. I had never heard him scream so loud. Oliver! I cried. Oliver! Yet, I let him run. Hope Floats came to mind. That scene where Bernice screams for her father as he drives away. That scene always had me in tears. Long before any of this ever happened. How little did I suspect that scene foretold my very own future.

I let him run down the sidewalk and then, in a panic that there was not enough sidewalk to harbor his hurt, I ran after him. I gathered him up in my arms, a show for the neighbors to watch, wiping his tears, wiping my own, kissing his eyes and face clean of his sadness. He was pure emotion in my embrace. I'd rock him. I love you Oliver. Daddy loves you. It's going to be alright. You'll see him tomorrow. And there, in the middle of the block, I didn't give a flying f_ck what the neighbors thought. I'd carry him screaming back into our house. His screams simmered to a whimper. A few short inhales. And then, desperate for comfort, for assurance, he begged me to let him nurse. How could I not? In a matter of minutes he would calm. The excitement stopped. His body eased into mine. It was gone; his tension and pain eased. His anxiety and fear left. His dad was gone, but I was here. Soon he'd pick up a toy and begin to play again, quietly. The boy learned early and quickly that life goes on.


When I shared that first experience with Matt (it happened twice on the street, and quite a few times in the car after "transfer"), he told me not to tell him such things, that it hurt him too much.

The clip below, while cinematic in its story line, is so close to the truth, it hurts. It was painful to watch it before this all happened to us. I've seen the film so many times, each time crying during the scene below. It's just as difficult to watch it now — the first time since Matt left. It's all so very real. It's stunning how true to life the end of that film was. It's incredible how it foretold my future, a scene that was etched in my mind, in my heart. A scene that was memorable at best, and emotionally stabbing at its worst. I am shocked going back now to watch this, how almost identical this scene is to my own, true, painful and yet hope-forming, strength-building story.

PS. Sorry, this was the only clip I could find of that scene. There are some a lot of weird "effects" in this clip. They kind of ruin the harsh reality of this scene. I'll see if I can't post a different one at some point.

If you don't want to watch the whole clip below, just start at 4:40 and watch until the end.


If the video doesn't load or you get an error message, try one of these links:

Here's the direct link to the video: http://youtu.be/GrFr1TowfcY