Door County Weekend with the Girls

Got to spend a couple days with these three beautiful females.... 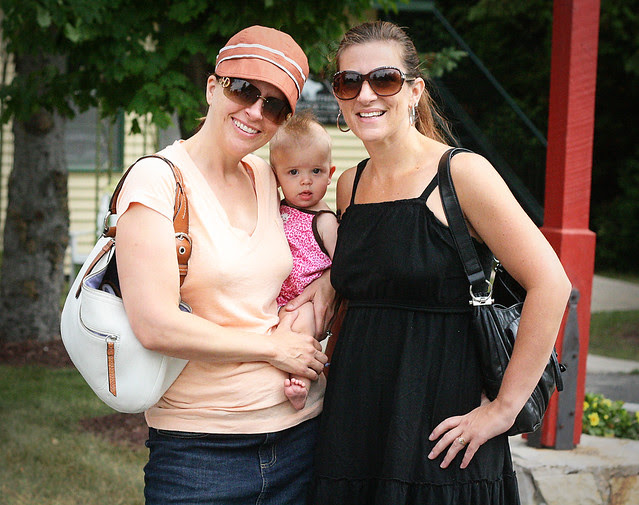 It was carefree, joyful, intimate and a barrel of laughs. It was definitely too short.

*  *  *  *  *
I had a great weekend even with a few concerns about my little guy. Matt called to let me know Oliver was running a high temp all weekend. He kept me posted and toward the middle of the day on Saturday our conversation got a little stressful. I don't know the word for it, but he got a little defensive or maybe it's that he came from a fear-based placed, and he got a little over-reactive. It could have snow balled, but I didn't take any bait. I was able to let it go, move on and know that he's just not — still — in the best of places.
Coming home was nice, but seeing Matt when he dropped off Oliver was difficult. All my bags were on the sidewalk as he side-stepped them and walked to my front door. His cool aloofness has been in our marriage the past few years, and it's something that breaks my heart. He walks away in the middle of conversations and I know when to stop pressing him on a subject. Such was the case during drop off. Cool. Cool. Cool. Yuck. Yuck. Disappointment.

Today also, is my birthday.
I want to say so many harsh, mean things and yet, I know that my son might read this blog some day and so I need to keep my mouth shut and take the high road. As I said, today is my birthday. One year ago today, I will be honest with you, it was so dang hard. I took Oliver to an amusement park. I was dying inside. I just wanted to die, take my own life. Oliver is the bright light in my heart and his spirit lit the path for me when I could not see in the dark. I lived in such pain for a long time, wishing that there was a way to get rid of the constant hurt. If these guys (I'm talking about the men who walk out on their wives) could only for a moment see the pain they have inflicted upon their families.... if only. But the walk-aways never look back, leaving a path of catastrophic destruction — broken hearts, broken families — behind them.
Matt wont look at that stuff. Today, he sees things only as they affect him. It's difficult to be patient and understanding with that. It seems he may have forgotten my birthday. Am I surprised? Yes! I am!! I truly am. There is little room for love and kindness in his voice, in his actions. I noticed what looked as if it could be an overnight bag in his car today. He texted me after he left to explain that it was filled with things to go to the beach with Oliver today, only it wasn't so kind of an explanation. (I did not inquire about said bag, but I'm sure the look on my face said it all... and it did. I retreated to my couch in terrific pain once they left... for various reasons, one being the overnight bag, one watching my sick sick limp feverish child being carried away.) I have vowed not to quote him on this blog. I've vowed not to take his inventory on this blog. I have vowed to speak about him with respect on this blog.
I so want to bash him and tell you all the things that have hurt me this past year. It wouldn't help me tho. I can tell you this however: I have spent a whole year being hurt, living in indescribable pain. While it still hurts a lot, today I have finally moved into anger. I am so rip-roaring mad it's not funny. And sadly, I see very few changes in my husband other than his looks. To watch him walk past me yesterday on the stoop without offering to help, to watch him walk past a broken planter, to watch him walk away without wishing me a happy birthday, to receive a text that was satisfying yet hurtful.... this makes me wonder why I don't give him his marching orders. (Reversely, it begs the question why hasn't he given me mine?) I mean, he's oceans away anyway. Why hang on?

I'd also like to say that I have looked so closely at my part in the break up of this marriage. I am not without blame. Not at all. As I study and learn more about myself and what it takes to have a good marriage, I do not rank up there with the shining examples of wife-dom. In fact, I was a downright awful wife at times. I did and said things that I hope I will never say and do again. I have learned many lessons the hard way. In my good moments, I have a lot of compassion for Matt. To live like he did for the past 10 years, without love and respect, is a difficult task. I know there were many other ways, at least I know that now, for him to let me know that he was unhappy. Instead he chose to leave his family... he walked out on his wife and child. In his eyes, he escaped control and emotional abuse (I believe). He talks about the "path" he is on now, and the people who support him on it. Hate him if you like. Trust me, I'd like to say a few things too right now. But truly, there are always two sides to every story. I know however, in the future, if I were ever to marry again, I would do my best to find someone who believes in the values and the contractual agreement of marriage. I will never find myself in this situation again. There are never any guarantees — and it is this that has made me fearful of ever finding another mate again. I miss the companionship, but I don't know if I could ever feel the way I did about Matt with anyone else. I don't know if I could have the basis of a friendship that I had with Matt. And my marriage is a perfect example of trust. I trusted him 100%. About 1 week or 2 just before he announced the end of our marriage, I thought to myself as I watched him with our son, "I love him so much. I can't see us ever getting divorced." How little did I know.

I'm angry, can you tell? Hurt and angry. I'm furious today. What a rotten place to be in, but truly, I know it's part of this process. Why we are still married baffles me. My husband acts like a few others out there who are already divorced or on their way to being divorced. Why he hasn't finalized it, I'm not sure. Want me to be truly honest? I'm glad we are still married. I have hope, I guess. Hanging on a bit yet. I think it's because I know in my heart of hearts that this marriage can be the most amazing one. But two people have to want that, at least a little bit. And one of us right now is no where near willing to try. Sadly.
Thanks for all your prayers. I took a 1/2 day full day off work since I was up with a sick Oliver most of the night. I'm heading into work to a doctor appointment with Oliver now. I know the day will be a good one. I have dinner and a Bible study with two women from my Divorce Care class tonight. I know they will help heal my wounds from the last 20 hours.
Labels: Door County marriage