The Packers – A Team of Rejects

My adorable nephew sent me this since I had a post or two talking about feeling rejected (or not).  He said that he’d hoped it would bring a smile to my face. I love that kid. (He’s not really a kid... he’s 6'2" 6'4" and in his second third year of college, on the swim team too....) 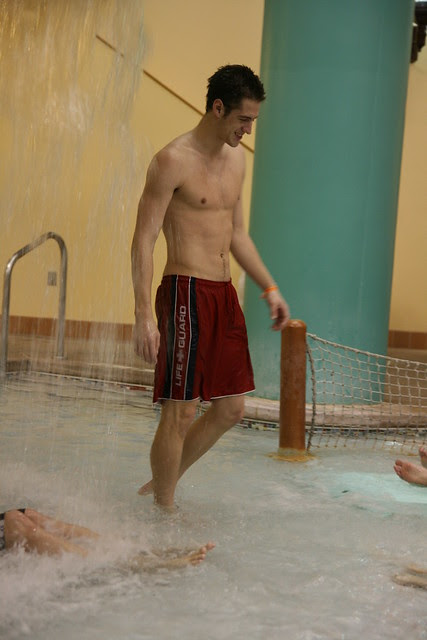 In case you don’t know, I live in Wisconsin and yes, we are all (almost) Green Bay Packer fans here, and even if you live under a rock you probably still have heard that the Packers are going to play in Super Bowl XLV.

I’ll summarize the article he sent me. Note: These are not my words, altho I’d love to take credit for this.

One from the Tampa Bay Buccaneers, who wanted to turn him into a safety (which to him wasn't an option), and one from the Green Bay Packers.

It became obvious to Woodson at that point that nobody wanted him, that he was just a useless has-been forced into NFL Siberia in order to continue playing the game he loved.

2005 NFL Draft - After about five hours of embarrassment and being passed on by 24 teams, Rodgers was finally selected by the Packers. Three years later, Green Bay finally decided it was time to dispose of legendary quarterback Brett Favre in favor of Rodgers, which was a highly, highly criticized move that had fans calling for GM Ted Thompsan's head.

You know why? Because nobody thought Rodgers was good enough.

He was considered by some a first-round talent who wasn't selected until the Packers used the 193rd pick in the sixth round to snatch him up.

He is now the leading rusher in the NFL postseason on any team.

The 213th pick in the 1999 NFL Draft has become the second greatest wide receiver to ever play his home games at Lambeau Field.

He knows how it feels to be rejected; after all, he didn't even start in high school until his senior season, which is really saying something considering the coach was...his dad. He walked on at USC and only made the team out of a favor to his dad who had a great career at Southern Cal. It took four years of waiting, but during his senior season he finally got his chance to start.

The man was waived by three teams in two years.

He ended up being the 26th overall pick in the next year's draft and many people thought that was a bit of a reach by Green Bay.

He was too big and out of shape for more than one-third of the league, but he seemed to be in just fine shape when he was starting for a Packers defense that shut out the New York Jets.

He was once cut by Ted Thompson himself.

They were perhaps two of the most talented corners ever to go undrafted.

Tramon had zero scholarship offers to play college football, so he attended Louisiana Tech University to get his engineering degree when, one day, he attended a Bulldogs game. They were getting smacked around so he said to himself, "I could do better than that." A week later, he walked-on to the football team.

Four years later he went undrafted in the 2006 NFL Draft. He was originally signed by the Houston Texans but cut before the final roster reduction.

Shields was a top recruit for Miami...as a wide receiver. However, when that failed he was forced to convert to cornerback as a senior.

The draft came and went and nobody wanted Shields, nobody but Green Bay that is.


And that’s really the theme of this team: not being good enough.

But on February 6, 2011, Woodson, Rodgers, Starks, Driver, Matthews, Walden, Green, Peprah, Williams and Shields will be doing what everybody thought they couldn't.

They will be doing something that nobody outside of Thompson ever thought they could do.

They will be playing in the Super Bowl.

Written by Mike A, featured columnist for Bleacherreport.com


It’s amazing that a team of misfits could create something so spectacular. And it gives me hope.

The last week was a little rough, but the weekend certainly was a baah-last! Saturday night I had a date! Yes! With my little son! It was great to have him all to myself. We made homemade pizza (organic of course ... comment if you need a recipe!), rented a movie and cuddled on the couch to watch Wallace and Grommit. Sunday we hit up a new church for the second week in a row, then sped down a big hill by the lake (and of course, near Alterra, my very very very favorite coffee shop) to go sledding for the first time ever. Oliver was thrilled. He absolutely loved it. I was in heaven taking my son sledding. The sun was out, the temps were a tad bit warmer (in the 20’s) and lots of kids were out. I don’t have any photos unfortunately because it was just me and my Peanut, and I could not risk taking the camera down the hill since I’m not that great of a sled - driver. :) We ended up going backwards down the hill most of the time. It was a blast though, and I can still hear my Peanut squealing in delight.

We headed over to Alterra right afterward to have a yummy cafe lunch and some warm beverages to heat up our insidess. Soon after my little guy could barely keep his eyes open. All that fresh, crispy winter air wore him out.

So all in all, the weekend was relaxing and generous with fun times together. If I could single parent all alone, that would be great! I hate having to share, albeit there are times when the break is very very good for me. But I do love being a mother and guiding my little Peanut in the journey of life. We have some really fun times together and it's just a privilege to turn him onto the thrills of life.

It's Monday evening as I write this. I was not quite ready to start my week today. We ended up with a rather slow morning, taking some time to get our bearings straight. That was very good for us. Sometimes it's just what you need... to take it slow.

Matt and I are trying something new with Oliver this week and next. I’m a little nervous about it, but I think it may be what’s best for our son. He has not been doing well with transitions, and he’s been crying out in distress lately for his daddy. So we are going 2 days in a row with Daddy now, instead of one day Daddy, one day Mommy and back and forth like that. Of course, the back and forth meant that there was never a full day that I did not see my son. I see him Monday mornings, but Matt picks him up from daycare in the evening. Then he spends Tuesdays with Oliver, and he brings Oliver back to me on Tuesday evening. If I lost you, just know I see my son daily. Now that will change. I dropped Oliver off at daycare today, and then I wont see him until Wednesday at 5:30.

Not sure this will work for me. No. I can’t do this. I can’t go without seeing my baby daily. Man.

Anyway, back to the Packers. Those guys certainly know how to prove themselves worthy and guess what? I’m doing the same thing over here. I am learning how to gain dignity. Today ended well. I was glad to come home to my quiet house. I was able to get some work done. Blog. Now it’s time for a game of solitaire, or maybe a little light reading and then I have to hit the sack so that I can hit the road running tomorrow.