Saturday was fun. I still had a bit of a heavy heart, but the day ended very well. But let me back up a bit. We started the day with a trip to my WW meeting. For those of you who are interested, I'm down to 119 lbs. I was somewhere in the 140's about 1 1/2 years ago when I started WW. Yay for me. I'd like to get down to 115. I thought that's where I was, but I guess not. Or maybe it was the jeans I had on at weigh-in. In any case, Oliver came with me to my meeting and we sat on the floor as we often do, so that Oliver wont disturb the meeting. My WW meeting is awesome. The leader knows my situation and has encouraged me to bring Oliver whenever I need to. It's like a small family there. And the best part was that Oliver pulled out his new truck (more on that later) and declared he was going to share it with another sweet 2-yr old boy on the floor with us. And so he did. What a kind-hearted kid I have!

Then over to The Outpost for their annual truck-load sale. This is where we get the opportunity to buy cases of food at rock bottom prices. I didn't tote my camera around with me, but my iPhone came in handy. Oliver loves to push the children's carts around. Today he showed me how strong he was. What a little man! 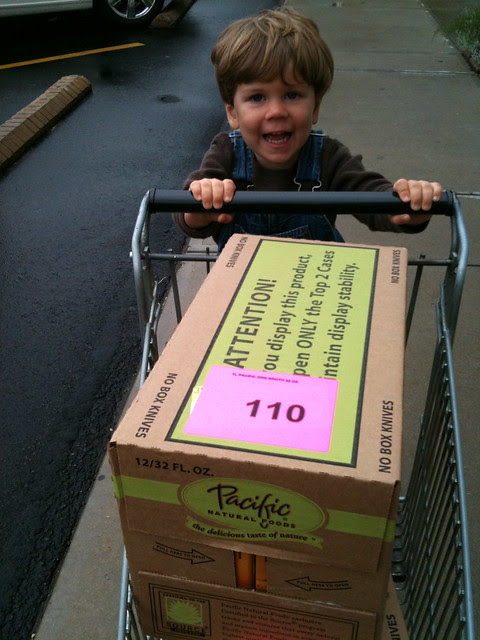 He then insisted, "I need to put this back now." And so he did! He brought the empty cart back to the store and pushed it in line with the other carts. I think this is a good thing. I'm actually quite impressed. 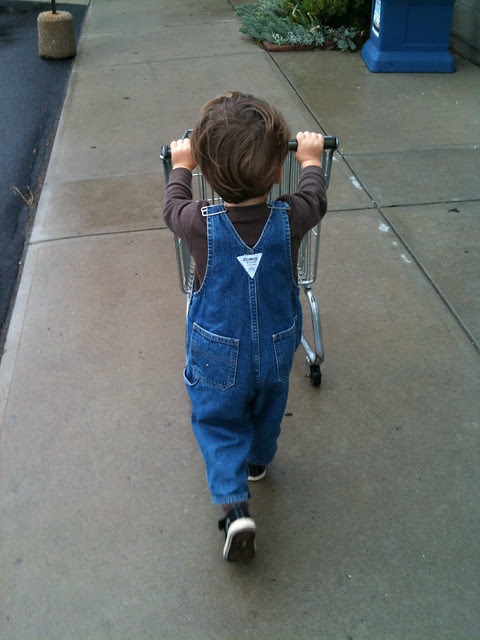 Next we met some friends in Brookfield for breakfast at the farmer's market. We wanted to actually enjoy another crepe at Satellite Crepes again, but because it was raining, we opted for cover at Panera's across the street. After breakfast and lots of puddle jumping, we headed over to the farmer's market after all, and Oliver charmed his way into getting us a handful of green beans. Actually, he helped himself to one, and the farmer's wife threw a handful into a bag for us to take home, free-of-charge. 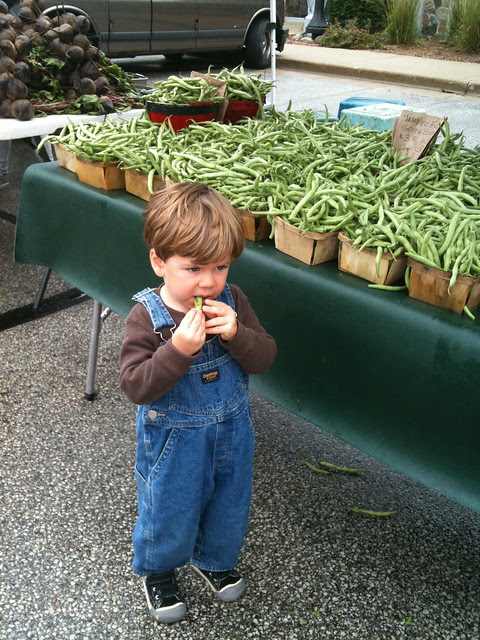 I picked up a few organic red peppers too. I'm going to make a roasted red pepper soup, and hopefully I'll document the process and share the recipe! Don't these look great? 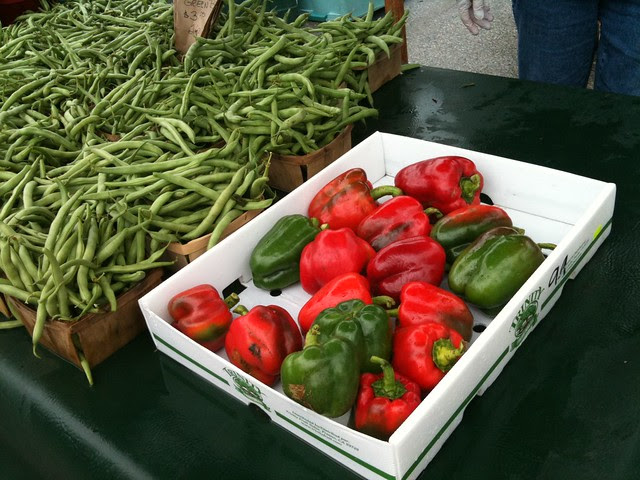 And the tomatoes were so incredibly beautiful! 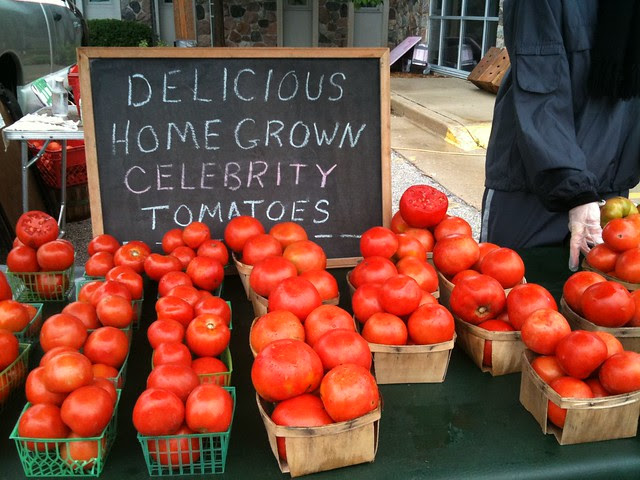 The photos turned out quite nice considering I took them with my phone.
We had a little fun in the park next to the market afterwards. My Peanut likes to roar a lot and then chase me around. 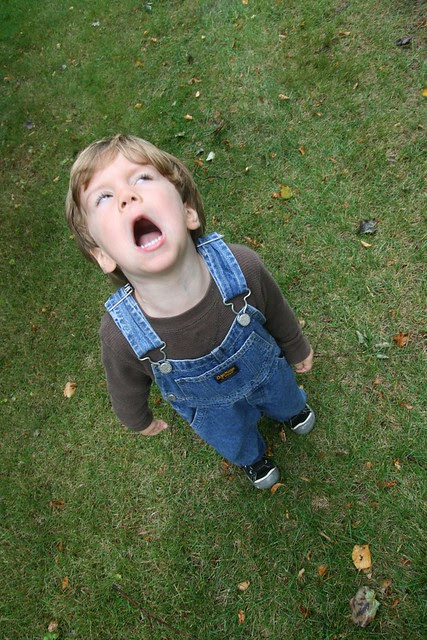 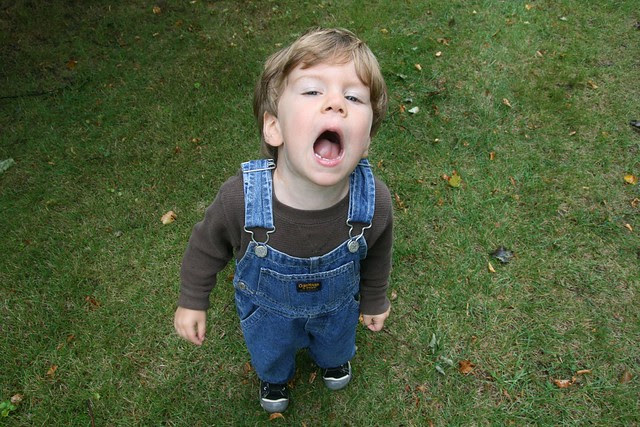 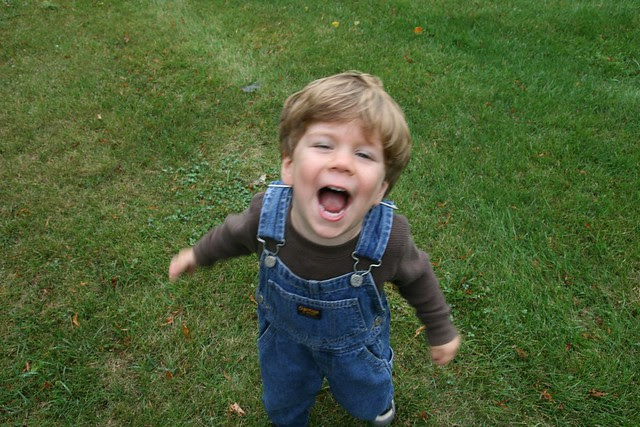 We headed home after that, and my little guy fell fast asleep in my arms. I still like to rock him sometimes before a nap — not always, but on occasion, and today was such a time. I knew his daddy was going to pick him up later that day and since my work-free Friday's have come to an end, it seems our time together has really been lessened. I held him close and watched him slowly settle into my lap and into a requisite state.
So not to dull you too much with the mundane tasks of the day (there's more we did, but I think it would seriously bore you)....I'll skip to the part of my day that really cheered me up and placed me into a requisite state....
I had dinner with a friend who is somewhat in the same place I am. She and her husband are separated. We had a great dinner and afterwards, I really felt strong and empowered. I knew that by Monday, heck even by Sunday, I might take a step back again. I'm no fool anymore regarding heartache... I am aware the reprieve will not last, but from that moment to now, I have been saved from it, minus a small 30-minute setback this morning, so I am completely enjoying it. (Ok, I am now certifiably schizophrenic  or perhaps manic... and I truly do not mean to take lightly those who suffer from such conditions.)
And then we saw Eat, Pray, Love. Now, don't get me started on that book, nor on the film reviews. For what it was, I did enjoy it, and I'd just like to end this post with a quote or five from the film, or actually, from the book. I will say, I have not been able to get thru the book and I've tried more than once. That included not only reading it, but listening to Elizabeth Gilbert narrate it herself in the audio version. No, I did not like the main character nor the fact that she left a good life and a good man and sought comfort in another before she was even divorced. And this I felt even before my husband left. Alrighty... I said I wouldn't get into it. I do have to say, I never got past Italy section, and so in the film I found the trip to India interesting and relevant to me and my situation. That is the lengthy explanation to why I have Gilbert's quotes on this post.
Here they are if I haven't already lost some of my readership in this boring post. ;)

This is a good sign, having a broken heart. It means we have tried for something.

You need to learn how to select your thoughts just the same way you select your clothes every day. This is a power you can cultivate. If you want to control things in your life so bad, work on the mind. That's the only thing you should be trying to control.

Someday you're gonna look back on this moment of your life as such a sweet time of grieving. You'll see that you were in mourning and your heart was broken, but your life was changing...

The resting place of the mind is the heart. The only thing the mind hears all day is clanging bells and noise and argument, and all it wants is quietude. The only place the mind will ever find peace is inside the silence of the heart. That's where you need to go.

Deep grief sometimes is almost like a specific location, a coordinate on a map of time. When you are standing in that forest of sorrow, you cannot imagine that you could ever find your way to a better place. But if someone can assure you that they themselves have stood in that same place, and now have moved on, sometimes this will bring hope.

Stop working so hard to get his forgiveness! Forgive yourself first!

So there you go. It's Sunday morning as I finish up this post. This morning didn't quite go as planned, thanks to a miscommunication between Oliver's father and me. Matt and I got thru it quickly and even had our apologies, a much quicker process than when we were together. And Oliver and I made due with the that little set back and change of plans, and we are still having a great morning.

Oliver's calling me now. I'm outside as I write this, and he's running around naked. Don't ask why. It just feels right I guess. The weather is gorgeous. The sun is shining. And just for today, we are OK.