As I have been going thru my iPhoto library and my flickr.com account, I realized just how unorganized my photos are! So part of my new year's resolution is to get organized and that includes not only my massive email inbox but the thousands of digital pix I've taken over the year. I wanted to do a year in review post of photos and in addition, list my new year's goals (what I want to continue doing and what needs a complete make-over) but time eludes me! Not to mention the fact that I cannot find a single, not one, photo taken in June of 09. How is it that I, someone who takes over 1000 pix a month, could not have taken a single pic of Oliver or anyone for that matter in the month of June. Where the  heck was I? Did I fall into a Black Hole? (like Target for instance.)

Another thing: it's practically impossible to work full-time, be a full-time parent, a wife, a friend, daughter and take time for my spiritual life (which I rarely talk about here) and then, on top of all that, BLOG! I have backlogs of posts just waiting to be published! But when? And one of my NYR's is to read one fiction book a month. Just one! ONE! And it has to be FICTION! Because if you check my GoodReads.com list, most of the books are prego breastfeeding child-rearing 101 How to Raise an Organic Family without Turning All Hippie on You books. And a few cookbooks for added measure. I haven't even been able to get thru the first of the Edward the Hot Vampire Twilight book series, and I even bought them all based on a recommendation that I could read them all within a week. Ha!

And here's a good one for you: I signed up for a promotional, 3-month special on Audible.com (I do not recommend it.) Each month, I pay a small fee and earn one credit so that I can download a book (read to me... it can't get any easier than that, can it?) I figured I could download 3 books and cancel. But no. Not only did I not cancel, but for 6 months or more now, I have been earning credits at full price since the promotional rate has expired. I'd love to cancel the account but I can't because if I do, I'll lose the credits that I've earned and paid for. But, my dear bloggies, I have no time to shop around on Audible to figure out what I want to download and listen to. None! So the credits are accumulatin' and I'm not getting anywhere near an audio book. Come on.

I have got to find more time! Somewhere there has to be some hidden time.

Let's see. On the weekends I like to: clean, cook, do laundry, shop and do at least one fun thing with Oliver like visit Betty or the zoo. Then there is a wee bit of social life like the occasional phone call to a friend or a chance meeting at a coffee shop. There's the husband and friends nightout which may or may not include Oliver. And trust me, if I don't get one night out at a restaurant, you don't want to be around me. It's like sleep deprivation and Chinese water torture all at once for me if I'm confined to my home all weekend long. Family visiting hours are on the weekends (which mainly includes my father and sometimes a visit to my sister's home). During the week I go to a couple of meetings (kind of like Bible studies without a Bible) and that leaves Tuesday and Thursday nights. Of those nights, only on Tuesdays (3 per month) is Matt home. So Tuesdays are my favorite usually b/c it's just the three of us. Thursdays it's just Oliver and me. Usually I'm cookin' up dinner and bathing the little guy on those nights. Tuesday nights are also my weekly phone calls to my long lost Aunt. Not really, but close enough. So, it's either lose some sleep and blog, or get a full night's rest and leave y'all hangin'.

Tonight was no exception. Matt ran out to a meeting and I put Oliver down, but to throw a wrench into tonight's plans, he was not interested in books and snuggling prior to bedtime. No. We went to an open house a few weeks back and there was Oliver, the only toddler at the party, finding ways to decorate the Christmas Tree with olive tapenade and vegetable dip. The hostess graciously the appeared with her 100-count, die-cast, miniature car collection that her now teenage and adult sons' once played with, in order to save the tapéno (she didn't care much about the tree). Oliver was in heaven and by the end of our visit, sweet-talked his way into bringing about 10 of those cars home with him. He hasn't released his clutch on them yet, demanding most days that we "Sit!" with him on the floor and play cars. Last night he went to bed cuddling not with Elmo nor another cuddly beast but a hard, metal car with plastic detailing. And tonight his obsession grew worse as he had to make nice with a whole basket of cars. He couldn't choose just one to snuggle so he had to bring the whole dang used car lot to bed. Once he sets his mind on something, he rarely looses site of it, leaving claw marks on it if I decide to remove it from his grasp. Gee... I wonder where he gets that from? I kid you not, that arm was not reaching into the basket to pull out a car. No, his arm was in the basket, hugging and holding onto his entire car collection.

That child. Bless his little heart.


Anyway, time eludes me and I just am not sure how to go about finding more of it. I think it's time to say the prayer of Jabez.... and ask God to make my plate bigger. 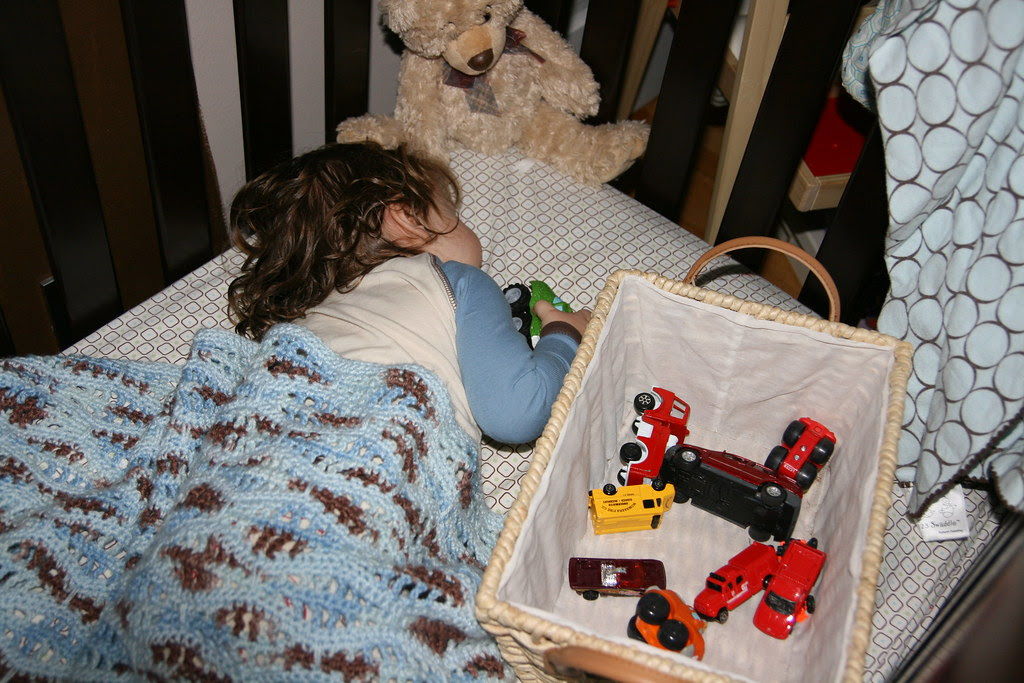