Momma's Got a New Pair of Wheels

I got it! I have a new bike! Finally. I can count the bikes I've had on one hand. Well, maybe two. Of course I had a tricycle, a hand-me-down... I think my dad painted it brick red. It was not as big and shiny as Geri Truczinski's trike down the block but I was glad I had it. It was a small heavy steel frame trike, and it rusted away. There was that reddish bike... another hand-me-down. I'm not sure if it was a Schwinn, but it was my first two wheeler bike. There was that awesome olive green, two-speed banana bike that was a hand-me-down from my big brother or some maybe it was my cousin Leo's. In any case, my brother once chased someone up a tree trying to get it back for me after it was stolen! He does get scary angry sometimes! There was my blue Schwinn, a hand-me-down from another cousin.

Intermission. With not much to tell originally, this post is getting quite long! I can write a lot of non-sense out of nothing really! Three. Two. One... And we're back on......

There was my grey Huffy. Crap. Or was it a silver Schwinn? Or maybe both? All these memories coming back to me and none of them quite making much sense. In any case, this was my very first new bike (whichever one it was, or both?). I loaned it to a guy friend who we had all hung out with one summer. He didn't return it in time and I had to return home w/o it. Boy did I get into trouble. Worse was the boy's situation. When he discovered that I had to return home without my brand new bike, he had to covertly return it to me, but my angered father was waiting for him with a vengence. My dad ran after him and kicked him in the arse. Yep. I could have died. It was all anyone talked about that summer. Of course, I look back and I know I'd do that same thing as a mother. He deserved that. But back then I was so embarrassed and devastated! I could barely look anyone in the eye after that!

So back to my bike history.... In my twenties, I had to get a magenta Bianchi with pink taped handle bars... a racing bike. My roommate's boyfriend worked at a bike shop and totally tricked out my bike with upgraded components. Then I took a complete 180 and bought a GT Mountain bike with fat, nubby tires (still a great bike to this day—Matt has assumed ownership). I bought it from the same guy and he tricked out that bike as well. Today I bought the kind of bike that a woman like me needs: a Trek hybrid... I can sit upright and pedal down the street in style.

I'd show a pic if only I had more room on my computer. At this very moment I'm backing up some old old files and removing about 50 GB from my hard drive. Then I can upload the rest of our Bayfield pix and show y'all a shot of myself and Peanut on our new wheels from this weekend.

Oh yeah, we bought a trailer for Oz so we can tote him behind us as we ride along. Pretty fun. Here's a pic of the one we rented this summer: 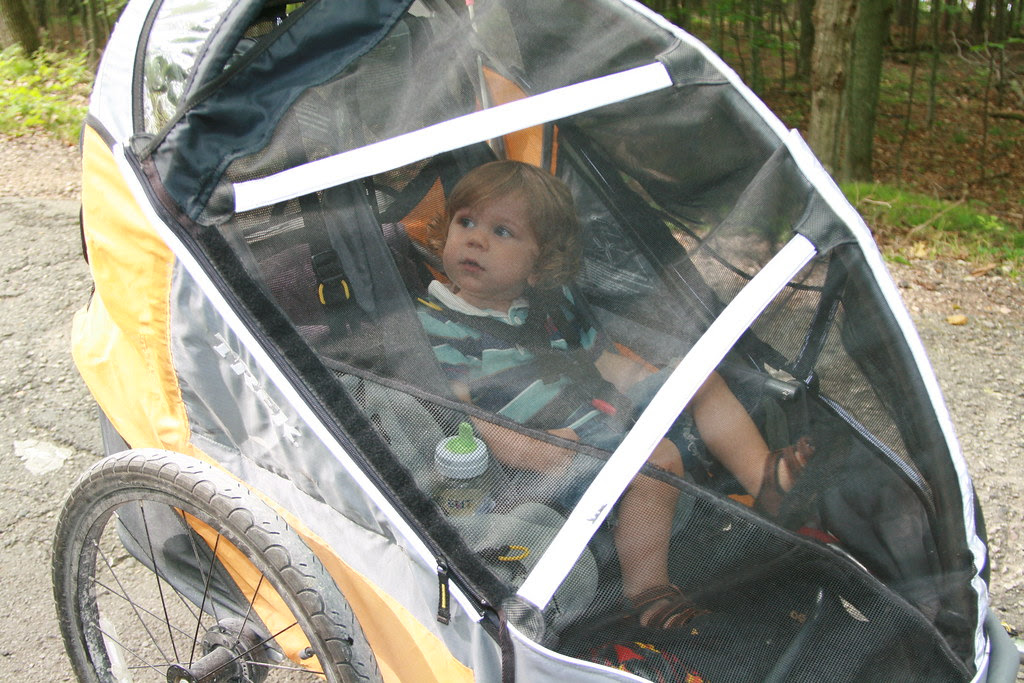 There was this great rental place up in Door County. Every season they buy a fleet of bikes to rent out for the tourists. We rented a bike from them this summer. Then at the end of the season, the sell off their fleet for half of the retail price. The bikes are used heavily, but for only one summer season. I don't mind. The bike I bought doesn't have any scratches. The trailer for Oliver has lots and lots of scratches, but that's OK by me. We saved over $500.

BTW, if you need a great article on getting the proper bike fit, read this! Your Bike Doesn't Have to Hurt You!

I will post a pic when I can. For now, I really have to tuck myself into bed. We have had quite a bit of travel lately. And tonight after we arrived home, I escorted Oz to the store in his chariot, cooked dinner for all, cleaned up, gave Peanut a bath, did some laundry and now really need to lay in our cozy bed and chill chill chill.