Oh my God, today Oliver picked up a toy, a really big toy, all by himself!

It's freakin' me out. All of the sudden, out of nowhere, he grabs things. At first (last week) you could place it by his hand and he'd hold on to it. Next, (and I will upload a photo of this) he began to hold it and bat himself in the head with it. Well, actually he'd be trying for his mouth but he'd kind of miss. Well, ok, really what's going on was this: the two plush toys that he does that with are sort of like little chicken wing bones... like a drumstick shape, and he grabs the small end, and as he lifts that to put it into his mouth, he bats his head with the other end. It's pretty funny actually.

But today, I bought him this really cool rubber chair that helps him to sit up since he can't do that yet and all he really has been wanting to do is join the ranks of us who sit up, drink coffee and chat about the upcoming election. Anyway, this cool chair came with a huge honkin' toy that I would NEVER have thought to buy him. First of all, it's too weird and not interesting to me at all. Second, I would never have thought he'd be ready for it. Anyway, he loves the chair and LOVE LOVE loves the toy! Not only does he love it, but he actually has the strength and stamina to pick it up and work hard to get parts of it into his mouth! And, it's as if the person who designed the toy really knew what a 3-month old was like because every aspect of that toy Oliver played with and found quite interesting. Who knew? (Not me obviously!)

Ok, now a bit about finances. So, tomorrow we are going to our very first pool party. I know he's too small yet to swim. But lemme tell you, I spent over $200 today getting him ready for the swim meet tomorrow! No kidding! I had so much to buy! Not to mention, I already HAD the swimming trunks! Here's what I bought:


Geeze, that really added up. I can't imagine that all that cost more than $200! Well, partly this is my fault of course—Oliver's obsessed mother. I'm not sure he needed all that stuff. But one never knows!

Here's a pic or two of his new chair and toy: (My peanut has the orange one.) 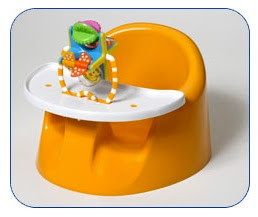 And here's a pic of Oliver's Ugly Doll that he occasionally will hammer into his head: 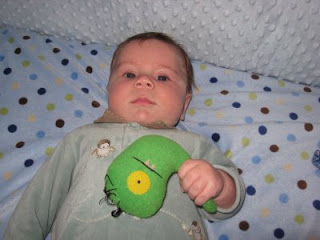